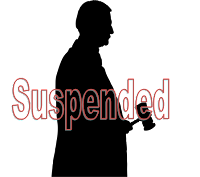 MONTGOMERY, Ala. (AP) — An Alabama probate judge accused of sending sexually charged messages and nude photos to a woman he met when she went to his office to wed another man has agreed to a six-month unpaid suspension, his lawyer said Thursday.

The complaint said Archer met a woman in 2013 when she was 34 and went to the probate office to wed a 68-year-old man. Archer performed the ceremony and noted the large age difference between the two, the complaint said.

The wedding was soon annulled, according to the complaint. In January, Archer began sending the woman sexually explicit messages and nude photos on Facebook, investigators alleged.

The complaint includes more than 60 pages of printed messages between Archer and the woman, including ones in which he allegedly wrote: "I want to hear you moan" and "what happened to us hooking up."

The messages ended after an east Alabama newspaper, The Alexander City Outlook, reported on them. The newspaper reported that Archer had admitted his actions at the time and apologized.

"Judge Archer made some bad mistakes with a person who admitted having an agenda to discredit him," Haynes said.

Archer, who has been married more than four decades, never had any physical contact with the woman, Haynes said.

The judge, who is not a lawyer, reached a settlement with judicial investigators in which he agreed to a six-month suspension without pay, Haynes said. The suspension will begin Monday provided the Alabama Court of the Judiciary, which hears administrative cases against judges, approves the settlement during a hearing, Haynes said.

"He will go back on full status in February," said Haynes.

Archer, a Republican who took office in January 2013, is among the Alabama probate judges who quit performing marriages last year rather than allow same-sex couples to wed in his office. His staff does issue wedding licenses for same-sex couples, however.

He should be removed from the bench and forced to get psychiatric help.