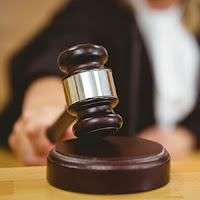 The former staff attorney/law clerk facing an indictment for allegedly impersonating an Illinois judge says she won’t take the bench, if she wins election, until an ethics case against her is resolved.

Rhonda Crawford said in a court filing that she would not oppose an order that would bar her from taking the bench until resolution of the ethics case, the Chicago Tribune reports.

Crawford was indicted earlier this month on a felony charge of official misconduct and a misdemeanor charge of false impersonation. She is accused of donning judicial robes and ruling in traffic court cases in August as part of a shadowing process. Crawford has said she was always under direction of the judge.

Crawford is seeking extra time to respond to the ethics case, which seeks to bar her from becoming a judge if she wins the Cook County judicial election. Crawford said the lawyer most familiar with the ethics case recently died, and she has hired new lawyers.

I would hope she'll wait.