Fighting assisted suicide in your state.

2017 will be an active year for those who protect people from assisted suicide.

EPC - USA has organized an Assisted Suicide Training Session to provide you with the tools to fight assisted suicide in your state. 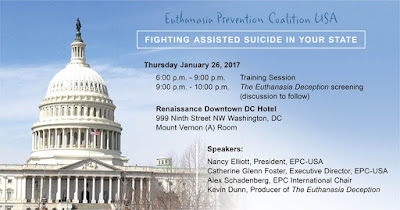 There will also be a federal debate as to whether the District of Columbia assisted suicide law will be overturned.

The event begins at 6 pm until 9 pm and is followed by the screening of the Euthanasia Deception documentary.

We have limited seating. To book your seat at this event. (Link)

Thank you for this post. I hate the thought of assisted suicide because I believe it will easily become a vehicle for murderers.