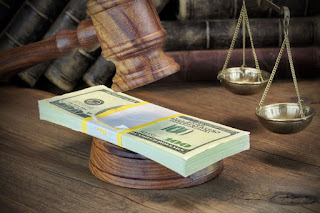 NORTHBRIDGE - A caretaker for an elderly man who is legally blind is facing charges after she wrote a check from his bank account to herself for $195,000, which the man said he never authorized.

Gloria S. Morvan, 61, of 51 High St. in the Whitinsville section of town, was arraigned April 25 in Uxbridge District Court on a charge of larceny of more than $250 from a person over 65 or disabled. She was released on personal recognizance, although her bank account was frozen and she was ordered to stay away from the victim. Ms. Morvan is scheduled to return to court May 30.

In a statement to Northbridge police, Ms. Morvan said the money was a gift from her client. “He said he wanted to help me because I helped him,” she told police. “He said he had more money than he knew what to do with it. I never asked for it.”

She told police she used the money to purchase a condominium at 51 High St., Whitinsville, for $160,000. An additional $15,000 went to pay closing and other legal costs and to refinish the first floor of the condo. The remaining roughly $20,000 was in her bank account.

Records from the Worcester County Registry of Deeds show that Ms. Morvan purchased the property with cash on Feb. 28. On April 6 the property was transferred from Ms. Morvan to the Gloria Morvan Trust.

According to court documents, Ms. Morvan had been working part-time as a caretaker since October for Harold Swart, 83, who lives in the Cotton Mill Apartments at 17 Douglas Road. Mr. Swart is legally blind and paid Ms. Morvan in cash to help him with chores such as paying bills and grocery shopping.

In the report prepared by Northbridge Patrolman Matthew Leonard, Mr. Swart told police that he would sign checks with Ms. Morvan’s assistance, through two sets of eyeglasses, and she would write the check out to whomever he was paying.

Mr. Swart told police he became suspicious of Ms. Morvan because she had helped him get a new ATM card and it never came in the mail. He asked an employee at the apartment complex to look at his Santander Bank statements and the employee noticed a $195,000 withdrawal and a check made out to Ms. Morvan in January.

The statement showed that the check had cleared after being deposited through the ATM at Bank of America in Uxbridge, although Ms. Morvan said she deposited the check inside the bank.

Mr. Swart also said he was missing a complete book of checks assigned to his account.

Lt. Timothy Labrie filed to freeze Ms. Morvan’s accounts and took a sworn statement from Mr. Swart that Ms. Morvan helped him write out checks for bills such as National Grid and cable TV but he never authorized her to write out the check to herself in the amount of $195,000.

Police arrested Ms. Morvan on April 24 at her condo.

Mr. Swart also told police that he owned a car, in which Ms. Morvan would drive him, but she had kept the car and wouldn’t give it back to him. Police returned the car to Mr. Swart.

Lt. Labrie said in an interview that Santander Bank, where Mr. Swart has his account, did not contact Mr. Swart to question the $195,000 personal check to Ms. Morvan, even though he had never signed a check for anything nearly that large.

Although Mr. Swart filed a claim of fraudulent activity directly with the bank, police have not heard yet whether Santander will cover the $195,000 loss to Mr. Swart.

A gift? If he wanted to give her a gift, he'd have left it to her in his will.