For Vulnerable Older Adults, a Harrowing Sense of Being Trapped

HOUSTON — A Holocaust survivor waded waist-deep in flood water. Dozens of people were trapped in a 14-story residence for seniors. A disabled man sat alone at home, without the aide who usually helps him, watching the water rise and unsure if anyone would come.

Harvey was terrifying for millions of people along the Gulf Coast. But it was particularly difficult for the region’s seniors and disabled, many of whom struggled to escape as the water rose. Now, some wait in shelters for chemotherapy, dialysis, pain medication, a pillow. Rescue teams are still evacuating people from their homes.

Inside her apartment in a Houston Housing Authority senior residence on Friday, Ida Szydlik insisted that she hadn’t been scared as the water rushed into her building over the weekend, filling the first floor. “We were just frightened for the other people,” said Ms. Szydlik, 97, as she began to cry. “I was in prayer, but I wasn’t scared, I was too busy praying that this would all go away.”

It is impossible to be sure how many older people have been affected by the storm, and many experts say it is too early to know how nursing homes are dealing with the impact.

Still, throughout the region, there have been reports of nursing homes thrown into chaos by floods. In one assisted living facility in Dickinson, Tex., residents sat in murky water that reached well above their waists while they awaited rescue. Residents in another Houston senior home in Houston were trapped in dark rooms, with water covering their feet.

Officials from this state’s Health and Human Services Commission said that about 4,500 residents have been evacuated from more than 130 Texas nursing homes and assisted living facilities. The storm has killed at least 46 people; at least 9 of them were 65 years or older. The eldest was 89.

And in the aftermath of Harvey, the challenges of keeping older and disabled people healthy have been enormous.

More than 100 dialysis centers in the regions are closed, and in some cases patients have not been able to get transportation to the few that are open. Patients are separated from caregivers by flooded highways. And at the downtown convention center here that shelters thousands of people, a crew of volunteer doctors has been treating evacuees around the clock.

But people have been showing up with waterlogged pills that have turned to a sludgy mix, if they have them at all.

Dr. Shital Patel, a professor at Baylor College of Medicine who helped in the medical clinic at the convention center, said that many of the patients she saw had spent four or five days without taking medication or checking their insulin. 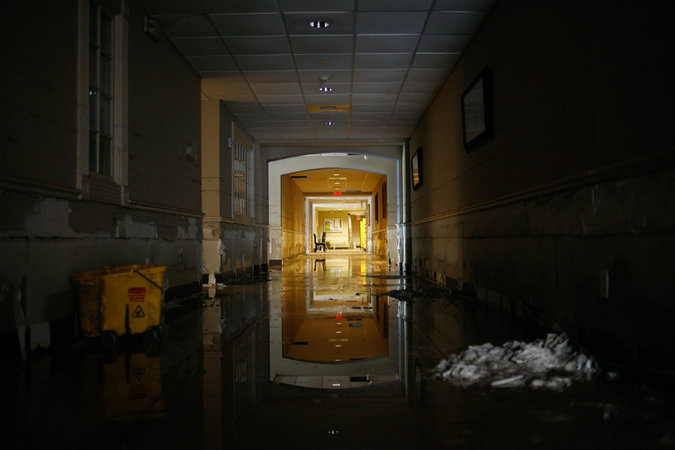 On Thursday, Danny Graves, 62, shuffled across the center in a yellow T-shirt that read: Built For It. He spoke low and slow and said he was bipolar and schizophrenic and normally has a caretaker who cooks and helps him shower. But she left before the storm.

When the water came in, it rose to Mr. Graves’s knees, he recalled, and he sat alone for hours after calling 911. He said he did not think he would make it out alive; he has trouble walking. “Rough,” was he how described it.

Finally, a neighbor arrived and helped him out. “I ain’t doing too good,” Mr. Graves said, standing amid thousands of people under florescent lights. “I ain’t used to this. First time I’ve ever been a storm.”

During Hurricane Katrina in 2005, more than half of the 1,800 people who died were people older than 65, and the depth of the tragedy set off a conversation about disaster preparedness in hospitals and senior care facilities across the country. During that hurricane, about 3,800 residents were evacuated from 53 nursing homes.

Since then, Texas has put in place many more safety requirements for elderly care providers, including rules requiring written evacuation plans and the designation of specific workers to deal with local emergency agencies.

On Friday, at a senior living center owned by the city a mile from the downtown convention center, residents described being trapped inside the building as the storm hit.

Water had poured into the glass-walled first floor — home to the dining area, the gym and the mail room, but no resident apartments — filling it like a fishbowl and blocking all exits.

Then the freshwater cut out. Ms. Szydlik, one of the residents, said her blood pressure spiked and she spent the next few days in her third-floor apartment eating canned tuna and being very careful not to flood the now unflushable toilets.

Once the floodwaters subsided, an army of volunteers, as well as building management staff, came to help residents, carrying water and food up 14 flights of stairs in buckets.

On Friday, Monique Ritter, 80, a Holocaust survivor, described how she had made it through Harvey.

As water gushed into her dining room and kitchen, friends came over and lifted her on to the kitchen island, where she waited — and fell, becoming soaked — until a rescue team came and pulled her onto a boat. Her granddaughter found a hotel room for her and her husband.

When the storm had finally passed, she returned home to find drawers full of water and photographs that belonged to her grandmother, now destroyed.

“We’re tired,” she said, speaking on the telephone from a hotel. “We’re exhausted, mentally and physically. I cannot tell you how I feel. I am really numb. We just got here and we need to rest. My husband is sleeping in his chair. We really need a break.”

Full Article & Source:
For Vulnerable Older Adults, a Harrowing Sense of Being Trapped
Posted by NASGA

I am glad to see how much attention has been on the elderly in Harvey's path.