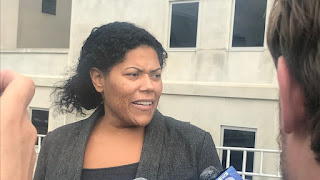 An agreement issued by the Commission on Legislative, Judicial and Executive Compensation Board is responsible for the pay increase. It is the final of four installments agreed upon for all judges working in New York. This process began in 2015.

Chief Administrative Judge Craig Doran confirmed Monday that Astacio is still not showing up for work as directed.

Astacio did report for work on Tuesday, February 27 for one day– and has not been back since. Judge Doran sent a letter to Astacio on February 23, ordering her to return to work at the Hall of Justice on February 26. Prior to this, she had not reported to work since August 31.

Astacio was assigned to handle legal work that did not put her on the bench. She subsequently provided Doran with a doctor's note, stating that she could not work.

The Rochester City Court judge was charged with DWI in February 2016 after she was involved in a car accident on Rt. 490 West while on her way to court to handle criminal arraignments. She was sentenced to 60 days in jail, three years probation, and six months with an alcohol ankle monitor in July 2017.

The New York State Judicial Conduct Commission has remained largely silent on whether it will or will not take up the case of Astacio's position of the bench.

Something has to be done about this. This is insanity!