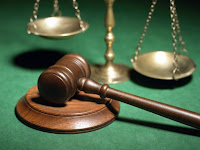 Jennifer L. Springer, 44, of Mount Vernon, has been charged with first-degree misdemeanor operating a vehicle while under the influence and a minor misdemeanor stop sign violation, Mount Vernon Municipal Court records show.

Springer is judge of the Knox County Probate and Juvenile Court.

Mount Vernon Municipal Court Judge John Thatcher has recused himself from the case, a representative from the city clerk of court's office confirmed Wednesday. The Supreme Court of Ohio is expected to find a replacement judge sometime this week.

"I am asking for another prosecutor to be appointed," Broeren confirmed Wednesday.

When will Springer be in court?

Springer is scheduled to be arraigned at 9:30 a.m. Friday, court records show. A court spokesman said Wednesday the arraignment should continue as scheduled, as a new judge and prosecutor should be in place by then.

Springer has not yet retained defense counsel, court records indicate.

Bad for her. She knew better.