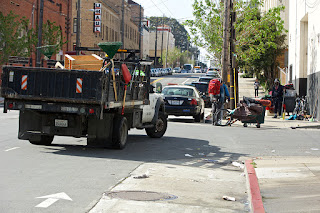 Mayor London Breed on Thursday vowed to introduce legislation creating a conservatorship program to compel homeless people suffering from mental illness and addiction to undergo treatment after a state bill allowing the expansion of conservatorships was signed into law.

The bill, signed into law Thursday by Gov. Jerry Brown, raises questions about the balance between medical care and personal liberties, but also about the strategies The City is using to address the homeless issue.

Counties need to pass legislation to implement the law.

Breed has strongly supported the bill and on Thursday vowed to introduce legislation to implement it in San Francisco.

“The status quo is unacceptable—it is not humane to allow San Franciscans struggling with severe mental illness and addiction to continue to suffer on our streets,” Breed said in a statement. “I have been a longtime supporter of strengthening our conservatorship laws and I look forward to moving quickly to implement this legislation at the local level so we can start providing care to those in need.”

But critics like Jessica Lehman, executive director of the nonprofit Senior and Disability Action, said The City shouldn’t implement the law but instead focus on adequate services.

“Conservatorship needs to be considered carefully and individually, not as a strategy to deal with homelessness,” Lehman said in an email to the San Francisco Examiner. “This has become a political issue about seeing homeless people with mental health disabilities on the streets, and it relies on the false narrative that they choose not to get services.”

She continued, “There is not enough housing, in shelters or permanent housing, and people are not being offered voluntary mental health services. The City must give people the services they need before rushing to scoop them up to get them out of the public eye.”

Breed seemingly has the votes to pass the legislation. A resolution to support SB 1045 received a 6-5 vote in April by the board. Supervisor Rafael Mandelman also helped lobby for the bill with Breed in Sacramento.

“San Francisco needs every tool we can get to help people who can’t help themselves get off our streets and into care,” Mandelman said in a statement. “I look forward to leading on local implementation with the Mayor and working with my colleagues on the Board to change our conservatorship laws here in San Francisco.”

Under the law, a person could be considered for conservatorship “due to a serious mental illness and substance use disorder, as evidenced by frequent detention” under 5150, which allows The City hold people involuntarily for up to 72 hours for evaluation if deemed a danger to themselves or others.
Frequent is defined as eight or more holds under 5150s within a year. A conservatorship would require a judge order and could last for up to one year.

“It’s neither progressive nor humane to watch as people deteriorate and die on our streets,” Wiener said in a statement. “Our counties do not have the tools they need to effectively help individuals suffering from severe mental health and substance abuse disorders. Senate Bill 1045 fills a significant gap by allowing our counties to care for our most debilitated residents and makes our conservatorship laws more effective.”

The City has already been preparing for the implementation of SB 1045 by establishing a coordinated effort among multiple city departments identifying those who require the most services, such as visits to the emergency room, and shifted the petitions for conservatorships to the City Attorney’s Office, away from the District Attorney’ Office, and funded more attorneys for the purpose.

David Elliott Lewis, vice president of the Mental Health Association of San Francisco, said Thursday he was against SB1045, and worried it “lowers the protection” of people’s civil liberties and would criminalize the mentally ill and those suffering from substance abuse. He said he understands that for Breed there is a “lot of pressure to do something” about the homeless and that “they hope to sweep it away with this bill” but didn’t think it would have an noticeable impact.

“The solution is supportive housing and more housing,” he said.

He added that The City would “get more results from Our City, Our Home than we will ever get from SB1045.”

Our City, Our Home, or Proposition C, is a tax on San Francisco’s largest businesses to fund homeless services before voters this November.

Breed continues to take “no position” on Prop. C, her spokesperson confirmed to the Examiner Thursday.

“The problem rests still with the lack of the supportive housing throughout the state and the wraparound services that accompany that,” Child said at the time.

Conservatorships are currently allowed under the Lanterman-Petris-Short Act, passed in the 1960s, for those determined by a court judge to be “gravely ill,” unable to provide their own basic needs like food, clothing or shelter.