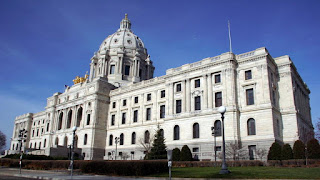 DULUTH — The 2019 Minnesota Legislature will again take up reforms aimed at keeping vulnerable and elderly Minnesotans safe and holding accountable those who are charged with their care. Efforts to do so earlier this year failed.

Rep. Liz Olson, DFL-Duluth, who will be the majority whip in the DFL-controlled House when the Legislature convenes in a month, said she’s hopeful her chamber and the Republican-controlled Senate will come together to create meaningful change. So are her fellow lawmakers.

“We don’t have another year to put this issue on the backburner,” said Sen. Karin Housley, R-St. Mary’s Point.

After a StarTribune investigation last fall that found very few reported allegations of elder abuse were being fully investigated, a consumer-led task force in January called for “far-reaching policy and agency practice changes to prevent and deter abuse.”

Specifically, the group recommended:
A bill born of those recommendations did not get a hearing.

Housley, chairwoman of the Senate Aging and Long-Term Care Committee, shepherded a bill to allow electronic monitoring of residents, require residents and family members be notified of abuse investigations, increase oversight of the Office of Health Facility Complaints and expand the Home Care Bill of Rights, among other initiatives.

Gov. Mark Dayton vetoed the bill as the session crashed to a close in May.

Since then, stakeholders across six working groups have been working to find common ground.

“We’ll start over, and hear bills early on where there’s agreement and work out the details where there isn’t,” said Rep. Jen Schultz, DFL-Duluth, who will be chairwoman of the House subcommittee on long term care.

Requiring assisted living facilities to be licensed is one issue where there is industry support.

“I do think we absolutely need to have a licensing structure for assisted living facilities. Minnesota is way behind the rest of the country on that particular measure,” said state Sen. Tony Lourey, DFL-Kerrick.

Gov.-elect Tim Walz agreed there is a need for better oversight.

“In many cases, it’s an industry that has grown rapidly with an aging population, and we haven’t quite figured out how to keep up with that,” he said.

Housley said she’ll consider all proposals the House sends over.

“Some of the things I’m hearing go too far for me and my constituents,” she said. “But I’m always going to have that discussion, and absolutely we’ll sit down and work together.”

Seven days newspapers piled up. Seven days he was missing from meals.

It took seven days for someone to realize that Kristine Sundberg’s father had died in a senior living facility. In the months that followed, Sundberg found she had little recourse to hold the facility accountable.

“I went to start looking at who are the authorities? I was blown away you could have no oversight of a facility like that,” she said at a meeting of a senior group last month.

Sundberg is now the board president of Elder Voice Advocates, an advocacy group that was part of the coalition that called for “far-reaching” reforms.

Industry group LeadingAge Minnesota, which represents more than 1,100 senior care-focused organizations, is open to a number of changes.

“We believe the working groups have provided the foundation from which to build, particularly in the areas of assisted living licensure, dementia care standards and electronic monitoring,” LeadingAge Minnesota CEO Gayle Kvenvold said.

That broader coalition should signal success early in the session, Kvenvold said.

“When we get to the details, that it is perhaps where it is most difficult to find that consensus, but I’m more than hopeful, in fact I’m optimistic, that we have broad enough agreements around some of the core principles,” she said.

Reach the Office of Health Facility Complaints at 651-201-4200 or health.ohfc-complaints@state.mn.us or visit http://bit.ly/mnOHFC