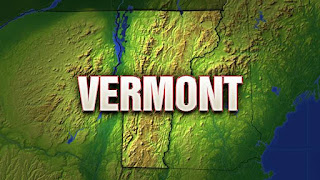 A Vermont man has been charged with stealing more than $48,000 from an elderly woman over a four-year period after gaining power of attorney of her affairs, police say.

Eric Brigham, 52, of Williamstown, was charged with one count of financial exploitation, according to Newport police.

Police say on Oct. 29, a private investigator working for an 84-year-old woman notified police that her relative, Brigham, had been taking advantage of her by abusing his power of attorney.

An investigation was launched and police discovered that Brigham had been given power of attorney of the woman’s affairs in June 2014, and in December 2014, Brigham allegedly began writing checks out of the victim’s account without her permission.

In February 2015, Brigham obtained checks that had both his name and the victim’s name on them under her account, according to police.

An investigation revealed Brigham used checks and a debit card to withdraw thousands of dollars in funds from the victim’s bank accounts on a regular basis over four years.

With the money, he allegedly purchased an all-terrain vehicle trailer, an enclosed trailer, custom picture frames, furniture, and had work done on his Audi sedan, according to police.

In numerous other instances, police say he wrote out checks to himself for cash or wrote them out under the victim’s name, but rarely gave the victim any of her own money and rarely visited her in the nursing home.

It was also determined that after the victim had moved from her home into the nursing home, Brigham either sold or threw out nearly all of her personal belongings and possessions, rather than putting them in storage and kept the money for himself, according to police.

In total, police say Brigham is believed to have stolen $48,149.11 from the victim and left her with several delinquent credit card bills and more than $20,000 in debt to her nursing home.

Brigham is scheduled to appear in Orleans District Court on Jan. 15.

And he's also left her in a guardianship for sure.