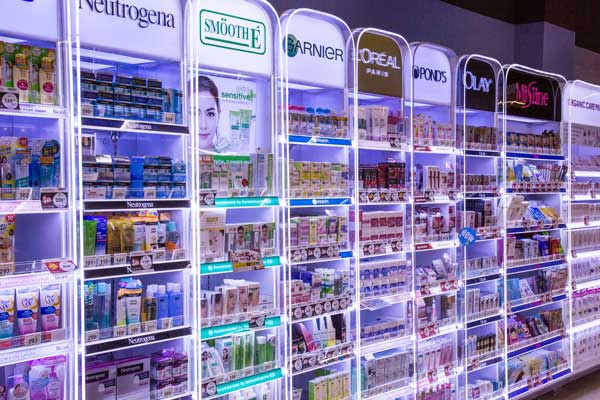 The thing I miss the most about being a younger person is supple skin. The face that looks back at me in the mirror has all the same features, but the skin doesn’t seem to fit around them quite as nicely as it used to. There is a little excess around the chin and wrinkles around the eyes that look like they don’t exactly know what to do with themselves.

Men often handle this problem by growing a mustache and a beard. Women are stuck with plastic surgery, injections, or extraordinary makeup. Being averse to the physical and financial pain inflicted by the first two choices, I had to find a makeup regimen that could keep me from cringing when I look in the mirror.

Now here’s the conundrum. As a woman ages, it takes more makeup to make her look good, but at the same time any amount of makeup is more obvious on more mature skin. What to do? Well, fortunately my eyesight isn’t as good as it once was, and for a while it worked to just not look too closely at my face in the mirror. But it was getting harder to put what makeup I did wear on my face because I couldn’t see what I was doing. So, I bought a magnifying mirror. Big mistake!

I immediately called my youngest daughter, who is a makeup artist, and begged for help. If she could make a normal person look like the Frankenstein monster, might not the reverse be true? She laughed at me and fit me into her schedule for the following week.

Hillary does a lot of weddings, and she shared that one of the biggest challenges she has is working with the mother of the bride. First, they are emotional because their daughter has chosen a life partner that isn’t her. Second is the rite of passage. Mom’s role now includes her in the older generation, and most of us have a little trouble being relegated to the back seat. And beyond that, most women in this age group haven’t changed their “look” or their makeup regimen for over a decade.

They end up being very grateful for my daughter, because she has targeted mature skin as one of her specialties. And she works with them until they are comfortable with their new look.

“So, why have you let your own mother walk around looking like a stegosaurus all these years?” I ask her. Apparently, she has been giving me hints and tips all along, but I wasn’t taking them seriously. Now I am.

Just a few quick tips to share what I have learned. Moisturizer is essential, both at night and under makeup during the day. Let it soak in before applying makeup. Next is the foundation primer, which prepares the skin for the makeup. Liquid is best, applied with an egg (a little egg-shaped sponge that retails for about $20). I am still unsure how often to wash this little gem, but I think it should be dry during application.

Foundation makeup needs to be the exact right shade, and it is worth spending a little more on this because it makes all the difference. Then liquid blush, not too much, blended on the top of cheekbones with the egg, followed by a highlighter just above that and leading around the outside of the eyes to make them pop.

My eyebrows have become thin and curly. An interesting challenge. We draw little lines along the shape of the brow, blend the foundation into them, and then blend with a brush. A little liquid eyeliner, then two applications of mascara to pump up the three eyelashes I have on each eye. Fake ones would be better, but I don’t have the patience. Lip liner, followed by gloss on the bows and on the under lip to plump them out. Spray entire face with a setting spray. And voila!

Sounds like I would look like Tammy Faye Bakker by now, remember her? But applied subtly and by the right hands, this is transformational. The idea is that it takes more to look like less. But yes, there is a downside. It cost me hundreds of dollars to acquire the high-end makeup items it requires, and in my inexperienced hands I need to start around 9 a.m. to look good by noon.

I will continue working on the techniques, and eventually I am sure it will become second nature. In the meantime, I am grateful to have a daughter who possesses this great information and talent. And on the days that I don’t have time to enhance my natural look, I remember what my grandmother told me when she started to get wrinkles and a sagging jawline.

“Smile,” she said. “It takes ten years off your face. And people will always be happy to see you.”

Getting old isn't bad - it's feeling old that will get you!

I was diagnosed with COPD stage 2, five years ago now. I moved to Wales 3 years ago in the hope my health would improve. I am now 66. I also had a triple heart bypass 10 years ago, which doesn't help! I often get headaches and migraines and can't walk upstairs without getting out of breath. Even small exertions sometimes make my breathing bad. I was also going through  cough and start getting really bad aches in my back and chests was directed by a local doctor in Cardiff to use totalcureherbsfoundation.com supplement on my condition which cure me perfectly, i went to pulmonologist and I was told that am free from Chronic obstructive pulmonary disease.xx