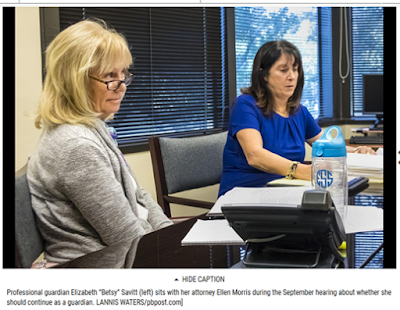 In a rebuke of Florida’s fledgling efforts to regulate professional guardians for incapacitated senior citizens, an administrative judge recommended the state drop its first ever effort to revoke the registration of a professional guardian — Palm Beach County’s Elizabeth “Betsy” Savitt.”

Savitt is the wife of former Circuit Judge Martin Colin. Families and guardianship reform advocates have long pointed to the couple as an example of a guardianship system that aims to extract fees from the life savings of incapacitated seniors and disabled adults.

Colin’s fellow judges — specifically family friend Circuit Judge David French who once oversaw the majority of her cases — were named in a report compiled by the Inspector General of the Palm Beach County’s Clerk & Comptroller’s Office finding “corruption and collusion of judges and lawyers in Delray Beach for financial gain.”

But it appears — for now — that the state’s new guardianship office’s aim to end Savitt’s career as a guardian in Palm Beach County has resulted in a swing and a miss.

Savitt “had no conflict between herself and Judge Colin because he did not appoint her or preside over her (professional guardian) cases,” wrote Administrative Law Judge Mary Li Creasy in a Dec. 21 recommendation to the Department of Elder Affairs.

And while the appearance of the potential conflict should have been better disclosed, Creasy said Savitt did not benefit and no seniors in her care were harmed.

Creasy, though, did find that Savitt violated guardianship statutes and abused her power by taking fees from the savings of her wards prior to court approval.

But the judge said the newly created Office of Public and Professional Guardians had no jurisdiction under the state law it cited to punish Savitt for acting “clearly against the wards’ best interest.”

“That is the exclusive purview of the circuit court which appointed (the professional guardian),” Creasy wrote in the decision filed. She said these judges ultimately approved these fees after Savitt had taken them improperly.

Repeatedly in her 35-page recommendation, Creasy said the state guardianship office failed to prove its case by clear and convincing evidence. As a result, Creasy recommended the office drop its case against Savitt ‒ a blow for the state’s novice effort to discipline guardians.

Savitt was quick to declare victory.

“As the court found, there was no impropriety in the handling of guardianship cases involving now retired Judges Martin Colin and David French or any other judges,” Savitt said in an email.

“There was insufficient evidence that I violated the guardianship statutes as charged and there was no evidence that any of my wards were harmed by me.”

However, Creasy’s recommendation remains for now just that ‒ a recommendation. The guardianship office falls under the Department of Elder Affairs, which will ultimately decide Savitt’s fate.

Ashley Chambers, spokeswoman for Elder Affairs, said the guardianship office does not agree with Creasy’s conclusions and will be submitting “exceptions” to the department, which has until March 21 to file its final order. Savitt will have a chance to challenge any final decision in an appellate court.

“Our Office of Public and Professional Guardianship (OPPG) will always pursue appropriate disciplinary action when a complaint investigation finds that a guardian has violated their statutory responsibilities or has not acted in the best interest of the ward,” Chambers said.

Robert Jarvis, a Nova Southeastern University law professor and expert on ethics, said that it’s clear Creasy thought the state guardianship office “did a terrible job presenting its case and was unwilling to cut it any slack.”

He notes Creasy stated that Savitt’s actions of failing to disclose her marriage and taking retainers before court approval erode the public confidence in the guardianship system. But the administrative judge added that “they are not actionable as charged” by the guardianship office.

“Savitt got very, very lucky,” Jarvis said. “Had the OPPG done a proper job of pleading, I have no doubt that Judge Creasy would have found that Savitt should be punished.”

Dr. Sam Sugar, founder of Americans Against Abusive Probate Guardianship, said he sees the judiciary once again protecting its own.

“If there were reason to question the integrity of the Florida judicial system this is Exhibit A,” Sugar said.

“This is a moment of deep shame that only reinforces the notion that the black robe mafia has nothing to worry about and can continue to lord over us in any way their whimsy dictates.”

The state guardianship office’s formed the basis of its administrative complaint from a detailed report compiled for it by Anthony Palmieri, the deputy inspector general of Palm Beach County’s Clerk & Comptroller’s Office.

“If the experience and expertise of Anthony Palmieri and the OPPG is insufficient to create a legally sufficient and powerful complaint to rid Florida from just one egregious guardian, then the rest of us in this state have no hope whatsoever of ever getting a fair shake from the probate courts,” Sugar said.

The clerk referred all questions to the state guardianship office.

North Palm Beach probate and guardianship attorney Mitchell Kitroser said the majority of guardians and the judges that they appear before work incredibly hard with far too little support. And despite Creasy’s recommendation, he thinks the state guardianship office’s investigation of Savitt will prove a reminder that the public’s perception of, and confidence in the legal process, is of paramount importance.

“One of the results of this investigation will be a greater sensitivity to the appearance that the public gets when a sitting judge and a close relative work in the same division of our legal system in the same county,” he said.

“Avoiding even the appearance of impropriety would, I think, help provide the public with greater confidence in the impartiality of our judiciary which is essential to the proper functioning of our legal system.”

Savitt’s work as a professional came to light in January 2016 in The Palm Beach Post’s investigative series, “Guardianship: A Broken Trust.”

Some of the attorneys who represented Savitt and funneled her guardianships appeared in front of Colin, relying on him to approve large fee requests in probate cases.

Following The Post’s report, Colin was transferred out of the probate division in February 2016 and retired at the end of that year. A criminal investigation into Colin was commenced by the State Attorney’s Office but resulted in no charges.

In one guardianship case, Savitt tried to annul a ward’s marriage, which the spouse feared would cut her out from any inheritance. In two other cases, families accused Savitt of funneling money to relatives of the ward.

Savitt also took more than $20,000 in what she called retainers from her ward’s savings prior to judicial approval ‒ the behavior Creasy cited as a violation of guardianship law.

Then there was the time the former attorneys for 86-year-old Frances Berkowitz, a Savitt ward, claimed $400,000 was missing from the senior’s account. Their efforts to open up an inquiry were shut down by a circuit judge, who found the attorneys did not have standing.

Savitt often points out she has never been removed from a guardianship by a judge and that no judge ever found any wrongdoing on her part.

When families fought Savitt, they found themselves embroiled in extricated legal affairs ‒ all of which resulted in large legal fees that went to Savitt and her lawyers. All such fees in a guardianship are paid by the incapacitated ward, whose money was almost always under Savitt’s control.

After The Post’s 2016 stories, then Palm Beach County Chief Circuit Judge Jeffrey Colbath adopted guardianship reform in October 2016. He addressed many of the complaints about Savitt, prohibiting retainers and establishing a wheel to address any perceived favoritism toward certain guardians.

Savitt, in her email, noted she hoped with Creasy’s recommendation, The Post and the Clerk’s Office will end “their unhealthy obsession with me and my family.”

Judge Martin Colin had a hand in his wife’s guardianship cases, state says

Guardianships: A Broken Trust: Attorney: "Courts Have Allowed This Culture"

Perhaps what she did was just on the edge of criminal. But, even with this setback, Elizabeth Savitt is a pariah.

The judge is an Administrative judge. The case was filed in...which court? Cases like this need to be prepared for criminal court action.

Unfortunately, this is white collar crime. From what I've seen, DAs (i.e., criminal prosecutors) are less inclined to take them on because they are not familiar with the specifics of what professional fiduciaries (professional guardians/conservators) do. The DAs see the cases as requiring large departmental (investigatory) resources, with much risk there won't be success.

That is why it becomes our job to become educated on what elements are required for a criminal case, so that the DA will accept the case and proceed, and do so successfully.

Re the administrative judge -- I've discovered upon my introduction to the world of the probate court (an administrative court) that just because someone is a judge/attorney doesn't mean they have spent time understanding their assigned area of law, that they actually care about their current assigned area of law, and/or that they have a whole lot upstairs in their brain.

I am in pure shock. All the good reporting by John Pacenti and they let Savitt off the hook? I can't believe it!