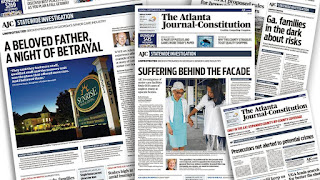 The Atlanta Journal-Constitution’s investigation detailing abuse and neglect across Georgia’s senior care industry prompted dozens of readers to share their own harrowing experiences and call for improvements to a system that impacts thousands of families.


“I felt like somebody was shining a light on a problem,” said Karen Goode, who said her mother with Alzheimer’s died in August, just 12 days after a serious fall at a facility in North Fulton where she had lived for a decade.

Like many families, Goode said they paid thousands a month, yet the facility always seemed short-staffed with a new director who cycled through almost every year. Goode was among the readers who emailed or called the AJC after publication of the series, which identified more than 600 cases of neglect and 90 of abuse in assisted living communities and large personal care homes across the state.

“The industry is so broken,” Goode said. “Even a series so compelling like this will not fix anything unless lawmakers get off their butts and do something.”

“Every Georgian should be able to age gracefully and with dignity in their communities,” said Cody Hall, Kemp’s press secretary. “These reports highlight serious issues involving care for aging adults, and we look forward to working with the Department of Community Health, state leaders, and local partners to review the current framework and identify areas for improvement.”

State Rep. Sharon Cooper, R-Marietta, who chairs the House Health and Human Services Committee, said she plans to introduce legislation when the Georgia General Assembly convenes in January. She wants to look at high staffing ratios at facilities, adding more state inspectors and other changes.
She said she’s heard from constituents about the AJC series, many of whom are bothered by the way seniors are treated.

“I tell them I’m working on it,” she said. “I don’t believe there’s a panacea that will make everything perfect, but there are certainly changes we can make that will move us a long way to the goal that we treat our seniors with the respect, dignity and care they deserve.”

State Rep. Jesse Petrea, R-Savannah, who chairs the House Human Relations & Aging Committee, said the Legislature has been proactive in recent years to protect seniors. He wasn’t ready to submit policy proposals in response to the series, but said he hopes lawmakers will do “anything in our power” to protect the most vulnerable in society.

“I’m all in for that,” he said. “The difficulty is knowing exactly how we could have altered some of these terrible outcomes.”

State Sen. Kay Kirkpatrick, R-Marietta, said the state has a responsibility to protect its vulnerable citizens, but the senior living industry also needs to take a “serious, introspective look” at itself and find ways to improve care.

“It’s in the best interest of the industry to be proactive and work on these issues,” said Kirkpatrick, a physician who is a member of the Senate Health and Human Services Committee. “Otherwise, it’s just a black eye on them. I think they should be leading the charge on this.”

The AJC uncovered conditions and incidents in senior care homes that must be “halted, corrected and punished,” said Vicki Vaughn Johnson, chair of the Georgia Council on Aging, a 20-member body created by the General Assembly to advise elected officials and state agencies.

The council includes both consumers and senior care service providers.

She called that amount “incredible, unbelievable and unacceptable.”

Johnson praised the thousands of direct care workers in Georgia who have the best interests of residents at heart, but she said they are often asked to care for too many people and with too little training. She called for the state to increase staffing and training requirements. Johnson urged Georgia citizens to contact state lawmakers to push for change.

“It’s in the best interest of the industry to be proactive and work on these issues. Otherwise, it’s just a black eye on them. I think they should be leading the charge on this.” —State Sen. Kay Kirkpatrick, R-Marietta


The senior care industry also responded to the AJC’s reports and acknowledged that some changes may be needed.

Saying it had “great intolerance for wrong-doing or substandard care,” the Georgia Senior Living Association said in a statement that it would support more state inspectors and “robust, unannounced inspection efforts.” It also called for more training for workers, as well as best practices in Georgia to reduce falls and improve care for residents with dementia.

The association said it would support enhanced reporting requirements in cases of suspected crimes and abuse.

“As an association that wants the best operators in the country, we will continue to advocate for high standards of care for all citizens of Georgia,” the association said in a statement.

Still, the association objected to the way the AJC investigation portrayed the industry.

“The AJC’s spotlight seems to only illuminate the negative, while the stories of hundreds of thousands of positive outcomes within the industry go unreported,” the association said in the statement.

The Georgia Health Care Association, which represents nursing homes, assisted living communities and other senior care providers, said it has a history of working with state government officials to make improvements, including a better background check system for caregivers that went into effect this month.

“The safety and well-being of elderly Georgians is GHCA’s highest priority, and any instance of poor care, neglect, abuse or exploitation is unacceptable,” said Tony Marshall, GHCA’s president.

The Culture Change Network of Georgia, a coalition of senior care providers, consumers and advocates, also responded to the AJC’s series, saying the coverage “shines a light on cases of inadequate care, abuse and neglect” that it wants the state to address through a careful review of current policies, laws and enforcement.

“We believe that everyone must be a stakeholder in improving the quality of care and quality of life for older Georgians,” the network said in a statement.

While many readers expressed gratitude that the AJC investigated the senior care industry, some were painfully reminded of their own family’s story.

Dave Markus’s 89-year-old father died nearly four years ago when he choked to death on a piece of steak in a Buckhead facility’s dining area. He said no one at the facility did anything to save him.

Markus just retired himself and he thinks the state needs to do more to regulate caregivers and companies. He and his wife wonder where they’ll turn when they need care.

”I’ve got no family behind me, no siblings. I’ve got no children,” Markus said. “We’re kind of concerned when one of us goes we don’t think there’s going to be anybody to look out for us.”