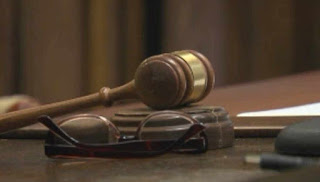 CHELSEA — A former Orange County probate judge has been publicly reprimanded by the Vermont Judicial Conduct Board for failing to dispose of matters “promptly, efficiently and fairly” in a family’s long-running guardianship dispute involving adult children of an elderly Newbury, Vt., woman.

Bernard Lewis, who was on the bench in probate court from 2002 until January, didn’t complete hearings or rule on motions in Miriam Thomas’ guardianship case in a timely fashion, nor did he follow up or enforce orders or hold parties accountable, according to the reprimand written by Judicial Conduct Board Chairman Andrew Maass dated Sept. 6. Siblings Elizabeth Guest and Bruce and Bryce Thomas alleged their brother, Paul Thomas, repeatedly abused his powers as their mother’s guardian and Lewis did little to stop it.

“The repeated failure to address and decide issues that came before the Judge related to the conduct of the guardian caused petitioners to incur significant attorney fees and resulted in inefficient use of both parties’ and the Court’s resources thereby constituting a failure to dispose of all judicial matters promptly, efficiently and fairly,” the reprimand states.

“The chronic failure to hold the guardian accountable for his actions with respect to his obligations while allowing him to pay himself enormous amounts of money over 7 ½ years, despite repeated filings that brought such issues to the Court’s attention, exemplifies a failure to dispose of issues fairly.”

Bruce Thomas on Thursday called the reprimand a “moral victory,” but said the harm Lewis caused through his handling of the case will be lasting.

“Although the damage Judge Lewis has caused our family continues to this day, it represents a moral victory of sorts — at least he was not able to sneak off into retirement without any sort of rebuke,” Thomas said in an email. “While this case is over for Judge Lewis, he created one very costly mess for all of us.”

Lewis no longer is a presiding judge in Vermont; he didn’t seek reelection and his term expired in January.

Reached this week, Lewis, whose attorney signed the finding agreeing on a reprimand, said there is more to the story, but he declined to elaborate.

“(This case) is a lot more complex than what is reflected in the reprimand,” the 75-year-old Lewis said. “I don’t think I did anything wrong. I was on the bench for 16 years and I had a lot harder cases than that.”

If he hadn’t decided to retire, he would have fought this to “the bitter end,” Lewis said.

Lewis has practiced law in Randolph and previously worked for Vermont’s Department of Banking, Insurance and Securities as a market conduct chief examiner.

The investigation into Lewis’ actions started in January 2018 when three of Paul Thomas’ siblings, including Bruce Thomas, filed a complaint to the conduct board, alleging Lewis engaged in a “pattern of inaction,” among many other things.

Judicial Conduct Board investigator John Kennelly, who acted as investigative counsel for the board, filed a formal complaint in January of this year over Lewis’ handling of the case, asserting Lewis violated provisions of the judicial cannon that states a judge “shall perform the duties of judicial office impartially and diligently.”

The parties went through discovery for a few months before Kennelly and Lewis’ attorney, Christopher Davis, last month jointly stipulated that a public reprimand was in order.

The matter is subject to review by the Vermont Supreme Court.

Miriam Thomas, who had dementia and was living in the memory care unit of an Upper Valley nursing home, died earlier this year at 94. She and her late husband, Fredrick Bryce Thomas, owned several pieces of real estate, including a tree farm. Together they ran their 21-room Pulaski Street home as the Newbury Inn.

After she went to the facility, Bruce and Bryce Thomas and Elizabeth Guest filed a guardianship petition, but siblings Paul Thomas and Mary Thomas filed a counterpetition seeking to appoint Paul Thomas. Lewis appointed Paul Thomas as financial and medical guardian in 2010.

Bruce Thomas, who works in the insurance industry in Connecticut, said he is still waiting for the court to hold a hearing on the matter.

“We would like not to have to think about this anymore, or spend any more time or money on this,” said Bruce Thomas, who hopes that the court will “uphold Vermont’s guardianship laws and order restitution.”

Attempts to reach Paul Thomas were unsuccessful. However, his attorney, John Page, told Seven Days last month that “(Any) published statement to the effect that Paul Thomas received excessive compensation as his mother’s guardian would be inaccurate, or at least unproven.

“That issue has yet to be adjudicated and therefore remains mere allegation until the court hears all the evidence and makes a ruling,” Page told Seven Days.