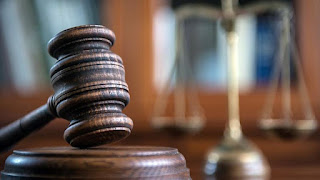 Pekin Attorney Matthew Stropes was appointed as the Tazewell County Public Guardian on December 3, 2009 and served in that post until August 27, 2019. A report from the Attorney Registration and Disciplinary Commission says during his time in the role he was "knowingly dishonest" and "involved in dishonesty, fraud, deceit, or misrepresentation" in stealing a total of $32,242.71 to use for his own personal purposes.

The public guardian looks over the estate and finances for elderly and disabled who have no one else to do so.

The complaint against Stropes was filed on November 20, 2019 to be reviewed in a hearing by the board of the Illinois Attorney Registration and Disciplinary Commission.

The complaint alleges Stropes wrote 3 checks and electronically transferred funds to himself from the account of James Westervelt totaling $20,955.21. The first check was written on December 13, 2013 with the last transaction taking place May 16, 2018. James Westervelt died on March 8, 2017.

Stropes is also accused of filing a false accounting. Steven Morgan, the attorney for the estate of James Westervelt, asked for a final accounting of the estate. Morgan filed an objection to the final estate on April 20, 2018. He accused Stropes of paying himself "guardianship fees" twice. One payment of $6,255 on October 29, 2015 and another payment of $6,787.50 on July 22, 2016. These payments were made in addition to the checks written to himself. The attorney for Westervelt's estate maintained the fees were not consistent with an affidavit and without approval of the court.

In addition, the final estate accounting does not include the checks that were written to Stropes by himself. The complaint said Stropes "knowingly omitted checks" which were payments to himself.

The fourth and final complaint alleges Stropes electronically transferred $2,500 and $2,000 from another disabled man, Peter Mitzo, to himself in October 2015 and March 2017.

In total, Stropes is accused of misappropriating $32, 242.71. The official complain was filed by Peter L. Rotskoff and Rachel C. Miller on behalf of the Illinois Attorney Registration and Disciplinary Commission.

A pre-hearing conference is scheduled for February 5, 2020 at 9:30 am via teleconference. An official hearing date is not set. It's unclear if criminal charges have been filed.

This story will be updated.

See Also:
Nick in the AM: Former Tazewell public guardian accused of stealing from clients
Posted by NASGA