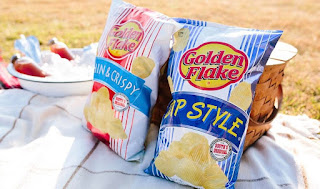 Golden Flake is a familiar brand for Alabamians, proudly woven into the state’s culture as a homegrown success story. Its potato chips — ever-present on the set of Paul “Bear” Bryant’s coach’s show, along with a Coca-Cola — were known for being part of the slogan “a great pair, says the Bear.”

Throughout the years, Joann Bashinsky, wife of Golden Flake founder Sloan Bashinsky, has become one of Alabama’s most faithful philanthropists. Affectionately called “Mama B” by those who know her best, Joann Bashinsky has given generously to Alabama charities and institutions such as Samford University, Big Oak Ranch, the University of Alabama and countless others.

But now there is a bitter legal dispute brewing over the Golden Flake fortune – currently estimated to be worth $200 million – as Bashinsky’s former allies have sought to have her declared mentally unfit to manage her finances.

In recent weeks, Bashinsky’s long-time family attorney John P. McKleroy, Jr. successfully petitioned the Jefferson County Probate Court to seize Bashinsky’s estate and appoint a temporary conservator on an emergency basis, alleging that she is unfit to oversee her own finances.

This action was based on allegations that Bashinsky had in recent months displayed a pattern of irresponsible financial dealings and irregular behaviors which led to intervening on her behalf because she may be declining mentally.

In a sign that things are only beginning to heat up in this rancorous feud, some members of the Bashinsky family have gone on the offensive.

In a statement to Yellowhammer News, Bashinsky expressed a feeling of betrayal by people to whom she had once been close.

“It’s very upsetting that people I have considered to be like family have made up lies about me so that they can steal my beloved foundation and family business away from me,” she lamented. “I trusted these people.”

Yellowhammer News also obtained a copy of a letter from Bashinsky’s personal physician, Dr. W. Robert Spiegel, in which he diagnosed her mentally fit.

This is an excerpt from Spiegel’s letter dated October 3, 2019:


I have been Mrs. Joann Bashinsky’s physician for well over five years.

She is competent to make decisions for herself.

Bashinsky contends this diagnosis should give her the right and freedom to invest, donate and spend her money however she sees fit.

In addition to their strong belief in her sound mental fitness, Bashinsky and her representatives expect Alabama law to support their position. They have asserted that there exists no basis in law for the action taken, as well as her due process rights having been violated for not having an opportunity to present evidence or have an attorney present at the proceeding.

Susan Walker, an attorney for Bashinsky, views the case ultimately as a squabble over the money Bashinsky’s late husband left behind for her.

“Several physicians, including her personal physician, have cleared her of dementia,” Walker reiterated to Yellowhammer News. “However, the disgruntled former employees have failed to apprise the Court of their financial interests in having Mrs. Bashinsky declared non compos mentis and unable to change her will in which they are beneficiaries.”

Bashinsky’s assets have been frozen, and the Jefferson County Probate Court appointed a temporary ward of her estate until March of 2020.

With both sides claiming to be acting in Bashinsky’s best interest, resolution of the case appears unlikely any time soon.

Tim Howe is an owner of Yellowhammer Multimedia