LANGHORNE, Pennsylvania (WPVI) -- Hundreds of nurses walked off the job at Saint Mary's Medical Center in Langhorne, Bucks County on Tuesday morning after negotiations broke down last week and as COVID-19 cases are surging once again.

"You can't be working with this kind of staffing," Anne DeMille told her fellow nurses on the picket line. She's been working at the hospital for 41 years and says she doesn't recognize her workplace anymore.
"Last year on my 40th anniversary, I drove in here at 5:30 in the morning and I looked at the hospital and I thought 'who does this?'" she said.

"We felt we have to come out for the patients , especially going into the second wave, so that they're safe," according to Mother-Baby nurse Beth Redwine.
The strike of nearly 800 nurses is being organized by the Pennsylvania Association of Staff Nurses and Allied Professionals.

PASNAP, which represents 8,500 nurses and healthcare professionals across the state, said 85 percent of the St. Mary nurses voted in favor of a strike authorization at the end of October. St. Mary nurses joined PASNAP in August 2019.

"The nurses feel they have no other means of making Trinity listen than to strike - for themselves, for their patients, and for what is coming over the next several months," PASNAP said in a statement prior to the strike. 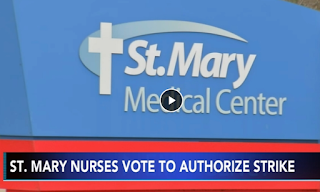 The nurses were planning a two-day strike but are not being put on the hospital schedule to work until Sunday.

The hospital hired replacement nurses while the nurses strike.

"A lot going on, on the inside that's not safe. We are out here for safety," PASNAP president Maureen May told Action News.

The nurses said negotiations began more than a year ago and stalled during the first wave of the pandemic.

The parties resumed negotiations over the summer, but the nurses say talks fell apart after St. Mary and PASNAP could not come to an agreement on safe staffing levels and wages that would recruit and retain vacancies.

PASNAP said health care workers are fleeing to other nearby hospitals 20 minutes away where they can make $6 to $7 more an hour.

The nurses at St. Mary said that since Trinity Health took over the hospital, staffing levels have dropped and have been at unsafe levels.

Medical-surgical nurse Bill Engle has been with the hospital for 17 years. Engle said when Trinity Health Systems took over the hospital several years ago, staffing levels began to drop.
"Up on the floors, we are looking for certain ratios. On the Medical Surgery Telemetry Unit, it should be four to one, five to one. There are days we have six patients each, seven patients each," Engle said.

In response, St Mary released the following statement, saying "qualified, professional agency nurses will be hired" while the nurses are on strike:

Unfortunately, the November 12 bargaining session between St. Mary and PASNAP ended without an agreement, and PASNAP rejected increased wage offers made by St. Mary on November 13. The bargaining unit members will go ahead with their planned strike on November 17 and while we are disappointed at their decision to strike, we recognize their legal right to do so. While they strike, St. Mary is laser-focused on ensuring we continue to provide care for our community, especially in light of the pandemic's trajectory -- case counts, hospitalizations, and community transmission have all increased in our region. Qualified, professional agency nurses have been hired to provide care during the strike in collaboration with the remainder of our exceptional clinical teams; they are experienced and skilled in working with COVID+ and all patients needing healthcare services. The hospital will schedule returning strikers beginning on November 22, to allow a safe transition in patient care from replacement nurses back to St. Mary nurses. St. Mary remains committed to bargaining in good faith to reach agreement on a fair, consistent and sustainable initial contract for St. Mary nurses, and we hope negotiations will resume in the near future.
Full Article & Source:
Nearly 800 nurses strike at St. Mary Medical Center in Bucks County
Posted by NASGA