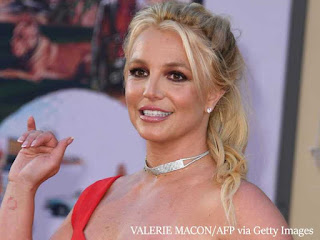 Britney Spears is thanking her “amazing fans” for supporting her during “a challenging year.”

Even without a pandemic, 2020 has been a tumultuous year for the pop star, who’s been fighting to remove her father, Jamie Spears, as her conservator. And, along with a video of herself dancing in a bra top and booty shorts, she posted a message to her fans who have rallied behind her with the #FreeBritney movement.

She ended by joking, “Who knows ... with all this time on my hands during quarantine I might even become a doctor,” before adding, “KIDDING.”

Spears has vowed not to perform again until Jamie is removed as her conservator, it was revealed during a November hearing. He’s been in the role for 12 years, taking over running her $60 million business empire after her 2007 breakdown, but their relationship has imploded, with her attorney telling the judge she “will not perform again if her father is in charge of her career” as they have no "viable working relationship.” Further, she’s “afraid of her father” and they have not spoken in a "long while.”

Spears’s mother, Lynne Spears, said the relationship between Britney and her ex-husband Jamie is “toxic” — yes, like Britney’s 2003 hit song — and her daughter is basically being forced to go on strike while she waits for her dad to step down. However, the judge kept Jamie in his role — along with new co-conservator Bessemer Trust — though the arrangement can be revisited in the new year.

Spears’s new video, which sees her changing outfits at the end, still has her fans — who think she’s being held against her will — concerned. “Something is wrong. Very wrong,” one person commented. Others wrote, “This is low-key scary” and “I’m sorry to say that I’m afraid for you.”

Other comments were about the superstar’s appearance, noting it is an older video as she recently cut her hair, and speculating someone else is in control of her phone and “posting videos of her dancing just for herself, not for Insta.” There was also criticism about her makeup.

Her fans continue to power the #FreeBritney movement in hopes of getting her out of her conservatorship reserved for incapacitated individuals, holding a Zoom rally earlier this month. (Spears’s own brother, Bryan Spears, said earlier this year that “obviously there was a need for” the conservatorship at the start but admitted that his sister has “wanted to get out of it for quite some time.”)

The year has been difficult for Spears in other ways. Her boyfriend, Sam Asghari, recently revealed that he had COVID-19, but said he was able to catch it before “infecting my loved ones.” The L.A.-based couple had just taken a trip to Hawaii.

Further, Spears only sees her two sons with ex-husband Kevin Federline 30 percent of the time, per their custody arrangement. Earlier this year, Jayden’s Instagram rant about his grandfather Jamie — saying the Spears patriarch “can go die,” among other criticism — went viral.

And, on top of it all, Spears also revealed this year that she had set fire to her home gym, citing an accident involving candles.

Full Article & Source:
Britney Spears thanks her 'amazing fans' for support during 'a challenging year'
Posted by NASGA