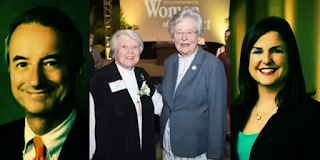 When you meet Joann Bashinsky you don’t have to use your imagination to picture her as a force to be reckoned with in her youth. At 88 years old she’s just as fiery and self-aware as someone decades younger. She played a pivotal role in the management of the Golden Flake company that her husband started. She’s also created a name for herself throughout Alabama as one of the most charitable philanthropists in the state.

It was her philanthropy work that caught my attention. However, in talking with her for a brief moment it didn’t take long for her to share details of what I’d describe as a fight for her life and livelihood. It seems she has found herself battling some of her formally most trusted employees and the very individuals a Jefferson County court declared, without any input from lawyers or witnesses on her behalf, was necessary to protect her.

In a continuance of her ongoing fight for independence, Bashinsky (known to many as Mrs. B or Mama B) told me a story of intimidation, scare-tactics and questionable ethical actions by two powerful and well-known attorneys. It’s a story that would sound as if it were ripped straight from the headlines of any long-running t.v. crime and legal drama, or was the plot of a novel if not for the fact – there’s audio.

The lawyers involved, are Greg Hawley and Amy Adams. Hawley is the former law partner of U.S. Senator Doug Jones. Adams is an attorney from Balch & Bingham, firm long considered a state and national powerhouse.

The facts below are supported by a recording that was made by Mrs. B on a day she unsuccessfully fought back efforts to retain her voting rights in SYB Inc, a company whose board she’d been a part of for decades.

The conversation and actions between Hawley, a man the court-appointed to protect Mrs. B’s interest, and Amy Adams, a woman who in her own words Mrs. B said used “scare tactics” to intimidate her into firing her current counsel and hiring her are painful to read or listen to, but let me summarize them for you below.

What happened was Hawley pulled Mrs. B aside before and then again after the board meeting, refusing to allow her chosen attorney Fisher Law at King & Spalding, in the room and leaving her alone with Adams for a period of time. Their goal: have Mrs. B fire her current legal council and hire Adams. When that didn’t happen, Hawley hired her anyway himself.

Here are 3 of the most alarming parts of the conversation:

The first, yet not even the most concerning issue arises in the first couple of minutes when Amy Adams meets Ms. B and says “I’ve seen your finances”.

Those documents are or at least should be confidential. At this point, Adams (Balch & Bingham), had not been retained by anyone in the case nor had Mrs. B. given her permission for them to be reviewed. She wasn’t even expecting to meet with Adams that day or at any other point.

But what’s worse? Not that Adams has seen the documents, but that she misrepresents them repeatedly.

She tells Mrs. B that she could potentially lose her house and staff and run out of money. These “scare tactics” as Mrs. B calls them is repeated, no fewer than 10 times over the course of their 2 conversations. With Adams saying things like,

“You’re not going to have enough money to live off of the rest of your life if you keep going through your money the way you’ve gone through it the last couple of years.”

She doesn’t stop there at the threat that Mrs. B losing her house. She goes on to suggest that Mrs. B might need to fire some of those who help her at her home. Trusted employees, some of whom have been with her for many years. Adams says this about them, “We might have to get rid of some of the people that are on your staff.”

The problem is Mrs. B owns her house and has tens of millions in liquid assets not including stock. This painful conversation goes on for several minutes at a time off and on during both meetings. The basic theme of Adams being if you want to stay in your house you need to hire me or my firm Balch & Bingham — at $425 per hour. She goes on to joke though if retained drinks with her would for free, “I wouldn’t charge you for that,” she says.

When Hawley returns to the conversation he makes it clear all that Adam’s repeated misrepresentations about Mrs. B being in dire financial straights can’t be verified, “What I don’t know yet is, I don’t have the whole financial picture so I can’t say, I can’t say that yet.” That doesn’t stop her from saying it a few more times as the conversation continues though.

Mrs. B sat for several competency tests. The results of which she describes as showing she is perfectly capable of managing her own affairs. Again, results that the court never even heard.

That said when Hawley brings up one of the initial tests, it was clear his office sent them to Adams. While Hawley is looking for them himself, Adams says, “I might have it on my phone.” Note this report would fall under the category of private health information (PHI) covered by HIPPA.

Hawley’s casual dismissal of the fact she has them and his office sent them, should send shock waves through his client list, “Margaret was supposed to just send you the letters of conservatorship but anyway…” he says, as if this sort of mistake happens every day and is just fine.

I emailed Hawley and among the questions I asked him was if his office was HIPAA compliant. In his response, in which he did not answer the HIPAA questions following his signature was this boilerplate messages, “CONFIDENTIALITY NOTICE: This e-mail and any attachments may contain confidential information that is legally privileged. Do not read this e-mail if you are not the intended recipient. If you are not the intended recipient, you are hereby notified that any disclosure, copying, distribution or use of any information contained in or attached to this e-mail is strictly prohibited. If you have received this e-mail in error, please immediately notify us by replying to the sender or calling the sender at (205) 490-XXXX and destroy the original email and its attachments without reading or saving it. Thank you.”

I don’t think it takes an expert to know Adams should have known better than to read private medical information that came from another attorney’s office before she was formally engaged by either party.

After Amy Adams spoke alone with Mrs. B, Hawley continues to push Mrs. B to hire Adams. Refusing to allow Mrs. B’s existing lawyer to be in the room. When Mrs. B decided not to hire Adams, telling me that she felt like Adams talked down to her, tried to use scare tactics, and made her feel disrespected, you’d think this would be the end of Adam’s chapter in this sordid situation. It wasn’t. After this meeting, Hawley hired Adams himself.

Nevermind that at the beginning of the conversation Adams gives her word that she’s not interested in helping Hawley just in being Mrs. B’s attorney, “When Greg called me I told him the only way I’d do it is if we could fire him because I wasn’t going with him. I’d only go with you and that’s what I told him that’s the only I would come.”

It wasn’t just a promise by Adams that she would only represent Mrs. B. Here’s what Hawley said, “Let me tell you, there are lawyers – Amy’s very decisive. Some people use the B-word to describe her, okay. She’s a great lawyer, but she’s very decisive, and she will represent you. And I even told her, and I’ll tell you this and I’ll tell you this, in front of her, and I’ll put it in writing that if she ever sees a conflict of interest developing between what’s best for you and something different I say, I want her to represent you, not me.”

“I want her to represent you, not me.” Those were his words and then he hired her anyway after Mrs. B said she didn’t want her engaged. It’s enough to make one’s head explode.

Can you imagine a loved one going through this? I cannot.

What’s more, I cannot begin to imagine how intimidating it would be find yourself at the mercy or a court who didn’t allow your voice to be heard before placing you in the “protection” of a lawyer who among, other concerning actions could willy nilly allow your medical and financial documents to be shared with others, by a lawyer who brought onto your case someone you clearly didn’t and wouldn’t hire yourself, someone you felt bullied by. This whole situation leaves many questions to be answered.

I asked about this situation, their code of conduct for lawyers, and a host of other questions to Adam’s direct supervisor at Balch & Bingham, Stan Blanton. I received a response to reach out to their media relations person. The spokesman sent the following statement after a call, “It is our understanding that Mrs. Bashinsky expressly stated that she did not want the conservator to engage Amy Adams as her attorney, and therefore no attorney-client relationship was formed. Balch & Bingham has not taken any position adverse to Mrs. Bashinsky.  Nevertheless, we notified the conservator of the firm’s intent to withdraw from our representation of the conservator in this matter to avoid being a distraction.” I responded to that message repeating questions from my first inquiry about their code of conduct or ethics and did not get a response.

It seems to me that keeping your word would be included in any code of conduct required of Adams, and as such, she shouldn’t have taken any role in this case after her promises to Mrs. B that she would only engage if she could engage on her behalf.

What I found after examining this case and conservatorship, in general, is that there is an exceptional lack of openness and transparency in the process. Seniors all over the country have found themselves seemingly railroaded by the court system and the attorneys who are supposed to “protect them”.

So I close this first story of a multi-part series posing the following questions: Are conservatorship/guardianship courts failing seniors here in Jefferson County or more broadly throughout Alabama? Who is going to stand up for the seniors who can’t stand up for themselves?