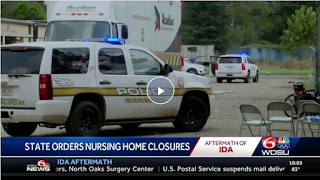 A class-action lawsuit has been filed on behalf of families whose loved ones were evacuated to a warehouse in Tangipahoa Parish and left in deplorable conditions.

The lawsuit was filed Monday against Bob Dean, the owner of seven facilities at the center of an investigation.

The lawsuit was filed in Jefferson Parish by Nancy Anderson, on behalf of her mother-in-law, Mrs. Leona Anderson; Joy Manguno, on behalf of her husband, Joseph T. Manguno; Jayme Songy, as curator for Malvina Songy; and Janice Verdin, as a responsible party for Catherine Roussell, according to the lawsuit.

The seven nursing homes evacuated more than 800 residents to Waterbury Cos. warehouse in Tangipahoa Parish ahead of Hurricane Ida, and had their licenses revoked, the Louisiana Department of Health announced Tuesday. The facilities' Medicaid provider agreements have also been terminated, the agency said.

The seven nursing homes are:

The announcement comes after seven nursing homes residents taken to the Waterbury Cos. warehouse died. State health officials were turned away when they went to inspect the facility the day after the storm, having received reports that conditions inside had worsened.

The lawsuit alleges that Dean denied the defendants their dignity, accusing him of abuse.

The lawsuit seeks damages and a jury trial.