Could woman accused of murder be appointed disabled man’s guardian?

By Teri Sforza
Just months before Michelle Morris was arrested for murder and lewd conduct, she gloated in an email.

Her letter to a county-appointed therapist for her adopted, profoundly disabled son, Ryan Morris, expressed deep thanks for his support of her legal fight to keep her son isolated from his biological family.

“I think you have really given the Court and Ryan’s attorneys what they need to eliminate the visits of Monica and Ronald although, of course, we know they will not go quietly,” Morris wrote. “We hope it is the gateway for Ryan to return to his home with Sean.”

Sean is Sean Spicer, the man that Morris allowed her son to marry, despite the young man’s inability to understand marriage. A judge removed Spicer as Ryan Morris’ legal guardian in 2019, saying the evidence showed Spicer was abusive. But a petition to make Spicer and Morris the disabled young man’s legal guardians is before a Riverside County judge nonetheless.

Ronald is Ronald Moore, Ryan Morris’ identical twin brother. The twins were separated, and the entire biological family cut off, shortly after Morris adopted Ryan, which the court approved over the biological family’s vehement objections. Twin Ronald, a healthy young man, has a petition pending to be his disabled brother’s legal guardian as well.

And Monica is Monica Mukai, Ryan Morris’ biological aunt, who has been fighting to “free” Ryan from Morris’s grasp long before Morris was accused of second-degree murder of one of her foster children, as well as sexual abuse of disabled people.

The plight of Brittany Spears focused attention on the abuses that can be attendant to conservatorships, California’s official parlance for legal guardianships. But the twists and turns in Ryan Morris’ highly unusual case raise profoundly larger questions, pitting two fundamental rights squarely against one another: the hard-won right for the disabled to marry and have sex lives, just like everyone else, and their right to be protected from abuse and undue influence.

The nettlesome issues were probed in a three-part series, “Twins, Divided,” by the Southern California News Group in 2017, but the twists keep coming. 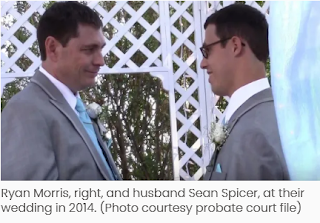 Morris, who operated a group foster home with her husband in Orange County before relocating it to Murrieta and finally shutting it down as her legal entanglements mounted, wrote her emails to licensed clinical social worker Richard Rowe in March. He had submitted a report to the court critical of Ryan Morris’ biological family members, and Morris expressed her hopes that they would be soon out of the picture once and for all.

Her emails do not reflect well on professionals in Riverside County and its Public Guardian’s Office, which the court appointed as Ryan Morris’ temporary conservator while the case wends its way through the courts.

“I spoke with the Court Investigator for Ryan and she was very open about the county’s disdain for Monica,” Morris wrote. “Ryan struggles to keep his cool with the ongoing visits with Ronald and Monica … we are praying for the end of that before Ryan just can’t take it any more (and Sean, too.)”

What Morris didn’t tell Rowe was that Spicer was ousted as Ryan Morris’ legal guardian because of what the judge called abusive behavior. Spicer would threaten to send Ryan Morris back to his adoptive mother when he misbehaved, threaten to take off his ring and end the marriage, threaten to send him for emergency mental health treatment, and punish him by restricting visits with his biological family and taking his phone away so he couldn’t contact them. Ryan Morris was told that his biological family was bad and wanted to end his marriage.

The psychologist concluded that Ryan Morris lacked capacity to enter into a marriage based on his concrete thinking and limited understanding of the institution.

But Rowe, the social worker, didn’t know any of that when he wrote critical evaluations to the court. He had never even been given a copy of the judge’s order removing Spicer and placing the county public guardian in control. The vital background didn’t come to his attention until he was called for a deposition by the biological family’s attorney, Charles Krolikowski, a partner with Newmeyer Dillion in Newport Beach, Rowe said in a declaration that went before a judge on Nov. 17.

In his declaration, Rowe disavowed his earlier reports and blasted Riverside County officials for manipulation and bias.

Around March 2020, Rowe was asked by Public Guardian Deputy Conservator Shirley Jackson to provide psychotherapy services in the conservatorship of Ryan Morris, Rowe said in the declaration. Jackson told him that, pursuant to a court order, his assignment would be to perform “relationship building services” among Ryan Morris, his adoptive mother, Spicer, Mukai and Moore.

“At the time, I asked Ms. Jackson several times for a copy of the order and any other background information that would be helpful, but she failed to provide this information to me,” he said.

Rowe was deposed on Oct. 8 by the biological family, and Krolikowski showed him the judge’s order “and the references to the many instances of abusive behavior inflicted by Spicer on Ryan,” the declaration says. “Despite my requests to Ms. Jackson to see the order, I had never seen these findings before, nor had I seen the actual directive from the court that Ryan was to visit with various persons in a ‘therapeutic setting.’ In my professional opinion, ‘visitation in a therapeutic setting’ is not the same as ‘relationship building’ (or psycho-therapy sessions), which was the instruction(s) I received from Ms. Jackson.”

Had Rowe known about the order and the actual directive from the court, he would have approached his assignment much differently, he said.

“(I)t was Spicer and Michelle that told me that Mukai, Moore, and even Mr. Krolikowski, were improperly using the legal process to abuse Ryan, but after reading the order, it appears to me that Moore (and his counsel, Mr. Krolikowski), were justified in proceeding to remove Spicer as Ryan’s conservator, and in fact, they prevailed.”

After reviewing the psychological evaluation that was ordered on Ryan, he came to understand  “that Ryan is easily influenced by others, and … I can see now that Spicer and possibly Michelle may have influenced Ryan’s negative attitudes, comments, and behaviors towards his biological family, including Mukai and Moore,” Rowe said. “I also now have a better understanding that much of the misinformation and negative comments I received about Mukai and Moore, were fed to me by Spicer and Michelle. … I was not given the full picture of Ryan’s situation by Ms. Jackson, Spicer or Michelle.”

Rowe sent an August email to Jackson expressing concern that the Public Guardian’s Office was overstepping its role, attempting to influence clinical interventions and violating its duties. “I came to the conclusion that I was being used as a pawn by the Public Guardian’s Office to render findings and recommendations without having all of the information I needed to do so,” he said.

After Rowe challenged Jackson, he was told his services were no longer needed, he said. In an email to Jackson, he said he was concerned that her decision to terminate his services was not in Ryan Morris’ best interest, and that she lacked neutrality regarding Spicer and Morris.

The mission of the public guardian is to safeguard the lives of people who can’t care for themselves with the least possible restriction of their liberties, and it must also protect the privacy and confidentiality of people under conservatorship, said Riverside County Behavioral Health Director Dr. Matthew Chang.

“Every member of the Public Guardian Program takes this mission seriously and has worked hard to address new and familiar issues pertaining to the program. Public trust is crucial for comprehensive conservatorship, and accountability is a vital component of that trust.”

Petitions to take over conservatorship from the public guardian — from Spicer and Morris on one hand, and from Mukai and Moore on the other — are on hold until the Court of Appeal weighs in on a challenge to the order removing Spicer as conservator.

The biological family also asked the court for permission to visit with Ryan Morris even if he decided he didn’t want to, in an attempt to get past the fear instilled in him. Officials say the Public Guardian’s Office will continue to use its own discretion and honor Ryan Morris’ wishes on visitation.

What? I know she's not been convicted and so is presumable innocent until proven guilty but would this appointment be in the disabled man's best interest? I think not.