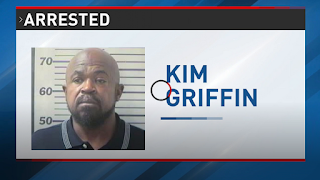 MOBILE, Ala. (WPMI) — The Mobile County Sheriff’s Office received a domestic violence complaint between a father and son last week. Deputies say the 56-year-old stepson, Kim Griffin, physically assaulted his 81-year-old stepfather, Willie McCall. The sheriff’s office says to call it what it is: elder abuse. After the assault, the victim, Willie McCall had to go to the hospital for injuries to the back, mouth, face, and neck.

56-year-old Kim Aundrea Griffin is in the Mobile Metro County Jail, charged with domestic violence strangulation, elderly abuse, and robbery of his 81-year-old stepfather Willie McCall. Griffin was trying to get McCall to sign over his power of attorney-giving griffin access to his finances, vehicle, and estate. When McCall refused to sign...

"The stepson who's 56 years old threw him against the cabinet, knocked him to the floor, and when he was on the floor began to choke and strangle him then beat him in the face," said Burch.

The stepson didn't stop there. Before taking the keys of the victim’s car:

"The stepson made the victim take off his bloody clothes and change into other clothes in case anyone was to come over, took the bloody clothes with him," said Burch.

Unfortunately, what happened to Willie McCall is not uncommon in Alabama. Commissioner of the AL Department of Senior Services, Jean Brown, says it happens more than you think.

"11,000 cases reported. For every one of those reported cases, it's estimated that there are 23 cases that are ongoing and occurring that are never reported," said Brown. "11,000 would be just the tip of the iceberg."

Brown tells me it's common for an elder to be abused by someone close to them like a family member. It's hard to say how long willie McCall was enduring this abuse.

Burch says the incident occurred over a financial dispute and that McCall is okay. Commissioner Brown says financial abuse can be one that goes unrecognized because the victim may not be aware that someone taking advantage of them.