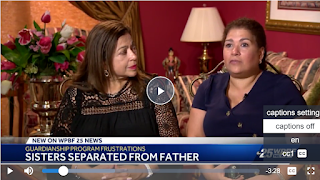 Benito Navarro is 92 years old. His daughters, Zoraida and Maritza Navarro, say for 63 years, their dad was married to their mom until she died. Soon after his wife’s death, Navarro started talking about marrying a woman from Peru whom he had spent time with on the phone.

His daughters worried their dad was about to enter into a fraudulent marriage. Maritza Navarro recently told WPBF 25 News. "We said, dad, you can’t do this. You don’t know this woman. This is illegal. She’s coming here for citizenship fraudulently. You cannot do this."

The sisters turned to the Palm Beach County Guardianship program hoping to protect their dad from an illegal marriage. The court placed him under an emergency temporary guardianship that is supposed to last 180 days. Nearly two years later, their father is still under a guardianship. "It's been horrible. Beyond horrible. I wouldn’t recommend anyone going through it," said Maritza Navarro.

While under the court-ordered guardianship, Benito Navarro has been moved from his home and placed in three different facilities. His long-time home was about to be sold, but the sisters went to court and managed to stop the sale. And according to his daughters, most of his belongings have moved out of his home.

Anthony Palmieri is the Deputy Inspector General & Chief Guardianship Investigator for the Clerk of the Circuit Court and Comptroller's Office in Palm Beach County. He told WPBF 25 news that guardianship is a last resort when all other alternatives have been exhausted. Palmieri also said families need to put a plan together before considering guardianship.

"Best practices are all your advanced directives, durable powers of attorney, joint bank accounts and putting assets into a trust. The best thing that elders can do is to communicate their wishes to their family members," Palmieri said.

The sisters must now get court approval to visit their dad. Last month, a judge granted them permission to visit him. It was the first time they were allowed to see him since May. But they said he wants to come back and live with them. But they must now wait until the court decides his future.

"I feel sad that we had wasted time. It’s just been a nightmare," Zoraida Navarro said.