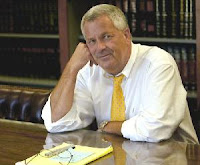 During a drug trafficking trial 18 years ago, the mention of Michael Conahan’s name brought the proceedings to a halt.

The terse instructions from U.S. District Judge Edwin Kosik drew a sharp response from the federal prosecutor whose witness dropped the then-Hazleton district justice’s name shortly after taking the stand.

Huddling in the front of the courtroom so the jury could not hear them, Kosik, then-assistant U.S. Attorney Malachy Mannion and defense attorney Leonard Sands engaged in a testy discussion on how to proceed in the drug trafficking trial of Ronald Belletiere in Scranton.

According to a transcript of the testimony from April 9, 1991, Hazleton businessman Neal DeAngelo, called as a government witness, had just said he had been tipped by Conahan, “telling me that he had heard my brother’s name mentioned down in city hall there in reference to some drug activity that was going on and he just wanted to advise me of the name being mentioned.”

So now we know Michael Conahan has been rotten to the core since the1990's.

EVERY case he touched from 1990 until now must be reviewed. I am sure it's a major undertaking, but it's important and it must be done.

They've known how crooked Conahan has been since the 90's?

It took 10 years to get him off the bench?

All judges are card-carrying lawyers!

If you say lawyer/liar very fast, over and over -

they sound the same!

Off with their heads!

It just gets deeper and deeper, doesn't it?

The discipline committee appears to be infected as well.

Then the AG should investigate the discipline committee too.

And where were all the good judges and lawyers? Why weren't they blowing the whistle on Conahan?

I just can't believe the nerve of this guy!

He'll be getting that smug smile wiped off his face!

There is no ?? about the Pa Judicial Conduct Board; if you read the relevant articles in newspaper and have a logical mind, it would be difficult to see anything but corruption equal to Conahan, maybe different details and/or style. The more I learn of Pa. the worse it gets. I don't think Pa is alone. Such people get addicted to power, and its' symbols; money, luxury, acting above the law with impunity, playing god with peoples lives. Not everyone acts nor becomes addicted to that extreme, nonetheless, the American judicial system has been allowed to act as a substitute to god. The BAR collectively succumbed to the temptation; NO ONE has stopped them and now MOST don't even question the takeover, since the BAR has been allowed over a period of at least 100 yrs to establish themselves as demi-gods. I see no indication members of the BAR or a percentage of them are doing anything to change that. ABSOLUTE POWER CORRUPTS ABSOLUTELY; I see no indication of that changing. Are they really gods? If granted the delusion too many take it to the extreme. That should give us a clue; question the status quo and actions must follow the answers. No one else will do it. It takes everyone who recognizes that.

Luzerne County voters made it easy for the crooks.