She was appointed to look after the health and wealth of the elderly and disabled -- to help those who couldn't help themselves.

Her title was rather authoritative. She was, according to state law, a guardian-conservator.

Authorities say she neither guarded nor conserved.

Instead, Dinah Turrentine-Sims pilfered the life savings of at least six people to the tune of more than $350,000, according to court records.

She took more than $240,000 from one elderly South Omaha couple -- a truck driver and his artist wife who had worked long and saved hard to put their three sons through college, police say. She withdrew chunks of their money from a Council Bluffs casino ATM -- at times, more than $1,000 a day, according to police reports.

All the while, Turrentine-Sims was operating under the supervision -- or lack thereof -- of Nebraska judges, primarily in Douglas County Probate Court.

No one checked her bank accounts. No one made sure she had the court-required separate accounts for people in her care. No one scrutinized her annual reports. No one spotted the inflated numbers and unusual entries in her ledger.

Now, Turrentine-Sims sits in a Texas jail, awaiting transfer to Douglas County on two counts of felony theft and two counts of abuse of a vulnerable adult.

And those close to the case -- including a local attorney and Douglas County Attorney Don Kleine -- are calling for a review of the law and the courts that are supposed to protect society's most vulnerable.

“There's always going to be people who are going to prey on people,” said Omaha attorney John Kinney, who is representing one of the families who lost thousands. “The question is: In the greatest justice system in the world, how are these people's assets not protected? How is this allowed to happen?” 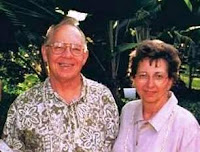 Jerry and Sophie Kresl on vacation in Hawaii, before his diabetes and dementia and her escalating health problems necessitated that they receive outside care. Authorities now say $240,000 of the Kresls' assets were reduced to $343 after conservator-guardian Dinah Turrentine-Sims was appointed to them.

Email ThisBlogThis!Share to TwitterShare to FacebookShare to Pinterest
Labels: Omaha

Another example of the horrors of guardianship / conservatorship NO ONE IS WATCHING THE GUARDIAN! The probate judges are ineffective and worse.

Dinah Turrentine-Sims is a thief; she needs to be incarcerated for the rest of her miserable life.

And, ask yourselves how many other victims are there? Without proof, testimony and the issue of statute of limitations is a crooks best friend.

Are YOU ready to be declared a ward of the state?

Will we be reading NASGA BLOG about YOUR story next?

I always wonder how many times families complained before they were heard in these cases.

Dinah Turrentine-Sims is a criminal and she belongs in jail!

More innocent victims losing almost everything before anything is done.

Where's the oversight? What about it, Judge?

On the good side of this horrible story, looks like the victims were lucky enough to find an ace reporter with a heart!

Take everything away from Dinah Turrentine-Sims and sell it and give the money to the people she has stolen from. She won't need it where she's going.

Read NASGA's "An Open Letter to Congress and the White House" at http://www.anopenlettertocongress.info

I am glad to see the attorneys for the victims so outraged.

i will pray for these victims of horrible abuse.

This activity happens everyday with no where to turn. Lawyers often bounce the victim back and forth with everybody getting a piece of their hard earned savings. Having a similiar situtation in Volusia County Florida, I view them as "professional thieves."

Will the Nebraska judges be disciplined?