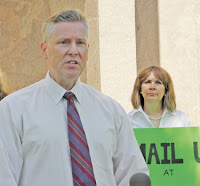 Former Maricopa County Attorney Andrew Thomas, on behalf of Citizens for Clean Courts, held the first of a series of press conferences on May 31 at the state capitol to advocate support of Proposition 115.

House Concurrent Resolution 1001 passed overwhelmingly with bipartisan support in the legislature to become Proposition 115 on the November ballot.

While serving as county attorney, Thomas attempted to clean up corruption in the courts, only to find himself facing a force much larger than he imagined; one that eventually resulted in his being disbarred along with Deputy County Attorney Lisa Aubuchon and suspension of Deputy County Attorney Rachel Alexander’s license.

Seems that what the Barfia calls bad guys are the real GOOD guys!

I just bet Thomas is trying to clean the courts up from judges just like the one in your feature story today from California.

I hope Andrew Thomas prevails. There is a lawyer in Cook County IL who is speaking out about the criminal activities in the Mary Sykes guardianship case. The IL ARDC is taking action against him; ARDC has filed a complaint against this lone voice lawyer Attorney Ken Ditkowsky. It's the pro guardianship team vs Ken Ditkowsky. Praying Ken is successful.