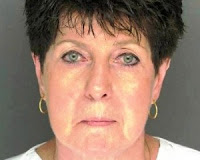 Almost five years ago, her dying neighbor asked Virginia Marquardt to look out for her personal finances after she entered a nursing home.

Instead, police say, the Bensalem woman helped herself to more than $300,000 of the woman’s money between August 2007 and March.

Marquardt, who faces five felony theft-related charges that could put her in jail for up to 35 years, was arrested and arraigned before Bensalem District Judge Joseph Falcone, who set her bail at $300,000/10 percent — the minimum amount the District Attorney requested. Her husband, Edward, immediately posted the bail.

If her husband posted the bail so quickly, that could be an indication that Virginia Marquardt had plenty of her own money she could lavish on herself.

I wonder how long this went on before it was noticed.

This woman is dispicable and so is her husband.
Check her OSHA recordable accidents and the company payouts from her employer from 2001to the present.

Shifty Marquardt was walking a fine line at her employer before this.Save a lil revenue at poor immigrant expenses being a.nurse and maybe not reporting serious accidents, hmmmm.