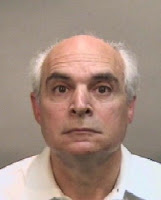 Alameda County Judge Paul Seeman may have had good intentions when he offered to help the couple that lived across the street from him in Berkeley - an elderly pair with no family, no friends and a home made uninhabitable by years of hoarding.

But whatever his initial purpose, his actions turned criminal, authorities said Thursday after charging him with elder financial abuse and taking him into custody at the Wiley Manuel Courthouse where he presides in downtown Oakland.

After a two-year investigation, Berkeley police said Seeman, 57, stole thousands of dollars from his neighbor Anne Nutting after her husband died in 1999 at age 90, sold off her art and other possessions, tried to bar her from her own home, and used her garage to store his beloved 1957 Ford Thunderbird.

Seeman befriended Nutting after her husband suffered a fall in 1998, authorities said, and ended up embezzling thousands of dollars from her by 2010, when she died at the age of 97. The two lived on Santa Barbara Road, east of Arlington Avenue in the Berkeley hills.

The Alameda County district attorney charged Seeman with one count of elder theft and 11 counts of perjury, all felonies, as well as enhancements alleging that he stole at least $200,000. He was being held Thursday evening at a downtown Oakland jail in lieu of $525,000 bail.

"The alleged conduct of Judge Seeman is both disturbing and disappointing," said Deputy District Attorney Teresa Drenick, a spokeswoman for her office. "His alleged conduct is in no way a reflection of the outstanding caliber of judicial officers serving Alameda County."

Best way to start my day!
A judge gets nailed for stealing!

How did he get by with it for so long?

It's going to be interesting to see what punishment judge Paul Seeman actually ends up with when it's all said and done.

I like to hear stories like this...you think you can get away with this..but it catches up to you..I would like to see the type of punishment he gets..