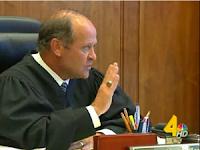 A Nashville judge has appointed a lawyer to investigate what’s going on with actress Reese Witherspoon’s father who is accused of bigamy and possibly has dementia, according to documents released in a sealed court case.

Earlier this month, Witherspoon’s mother, Betty Witherspoon, said her husband of 42 years married another woman even though he remained wed to her.
A hearing in that case, which was scheduled for Thursday, has been indefinitely postponed. In the meantime, documents released from another Nashville court indicate that John Witherspoon was placed in a conservatorship at the request of the Academy Award-winning actress and her brother.

The actress appeared in a Nashville courtroom on May 11 with her father, a Nashville otolaryngologist, but a judge barred the media from covering the hearing.

The Tennessean newspaper and WSMV-TV have filed an emergency petition with the probate court asking that the judge to unseal the documents and open all future court hearings to the media.

The limited documents released in the probate case mostly involved filings from the media.

A hearing has been scheduled on June 25 that will decide whether the judge will unseal the files and open any future court hearings.

Who made a motion to seal? Judge can't do it on his own.

Did he also seal the order sealing the file and his reasons for sealing, if there were any made?

We need to know what occurred during the prefiling visit.

Kennedy has to go!

And who gets to pay for this lawyer? Oh yes, the ward.

Kennedy didn't need to put yet another lawyer on the case; he just needs to follow the law.

the doc is conserved via temporary conservator what are the odds the doc will get himself free of this? in my opinion: 0 chance it's a done deal the way kennedy operates and the billing frenzy is underway wait til the family sees what happens to their dad's estate bye bye this should have been taken care of away from the court big mistake that many make it's a trap folks deadly trap

Depends who this appointed lawyer is for. If the lawyer is appointed for the Respondent I say great -- Kennedy rarely protects the respondent with an appointment of counsel.

About the sealed record, bull crap.

Conservatorship/guardianship proceedings are "in rem", an adjudication of status. As an "in rem" proceeding the proceeding itself is intended to be "notice to the world", lest someone try and contract with an incompetent

hey pat i respect your opinion but who the lawyer is does matter lets see is it paul housch or his other buddy michael hoskins? this could go either way housch and hoskins would guardianize the doc now, wait he is conserved already, well they would do it forever but with eyes on this case well wait a minute sealed files no eyes on this case hmmmmmmm now would jrk appoint a lawyer out of the phone book blindfolded of course now that would be the only way to have 1/10th of a chance at an independent unbiased representation