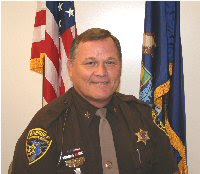 Those planning to swindle money from Michigan's elderly would be most deterred if they faced mandatory minimum jail time and fines for the crime, Livingston County Sheriff Bob Bezotte said.

So far, the Legislature is taking the opposite approach by proposing increasing maximum sentences for scamming senior citizens.

A bill has been approved in the Senate, and awaits a final House vote, that would increase prison time and fines for those convicted of swindling money or property from senior citizens or fraudulently obtaining their signatures.

He said maximum sentences in cases of swindling seniors are rarely, if ever, handed down in Michigan.

On Wednesday, he warned seniors gathered at the Hartland Senior Center of such scams, most of which he said have ranged from $5,000 to $25,000 in the county in recent years.

"The sentences have got to fit the crime, and you've got to know if they're going to rip off a senior citizen, it's going to be this amount" of punishment, Bezotte said.

"Take some discretion away from the judges," he added.

I hope this includes those who have a "license to steal"; i.e., court-appointed fiduciaries.

I was thinking the same thing, Thelma.

Aren't you sick and tired of hearing about legislation like this which increases penalties without doing anything that needs to be done to reliably stop legal professionals from taking advantage of us even during our final hours under a morphine drip and under a Do Not Resuscitate order?