Beall asked Lightbourne the following questions.
•What are the legal timelines to investigate complaints?
•How does the department prioritize complaints?
•Standards used to substantiate complaints.
•What legal authority, aside from a restraining order, do Wildwood Canyon Villa administrators or a conservator have to restrict a family member’s visitation? 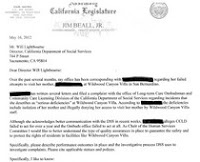 Beall’s letter follows nearly two years of complaints against Wildwood Canyon Villa in Yucaipa, CA. Family reported that Wildwood held resident 76-year-old Jean Swope against her will and isolated her from phone calls and visitors for fifteen months. Court records include many allegations of elder abuse and neglect.

Swope’s case falls under Beall’s purview as the Chair of the Human Services Committee. The case was brought to Beall’s attention many times since 2011.

Villa Fontana has denied Gisela nearly all phone calls and visitation for over two years. Gisela has been allowed to see her son, Marcus Riordan, less than two hours in two years. She has been subject to profound neglect, losing a third of her body weight.

Thank you, Assemblyman Beall. The problem grows daily, and something must be done to end it.

Isolation is nothing more than a coverup for tortious acts and omissions.

Isolation is torture for sure!

Linda, you've got to sleep well at night, knowing you've done so much for vulnerable people. Thank you.