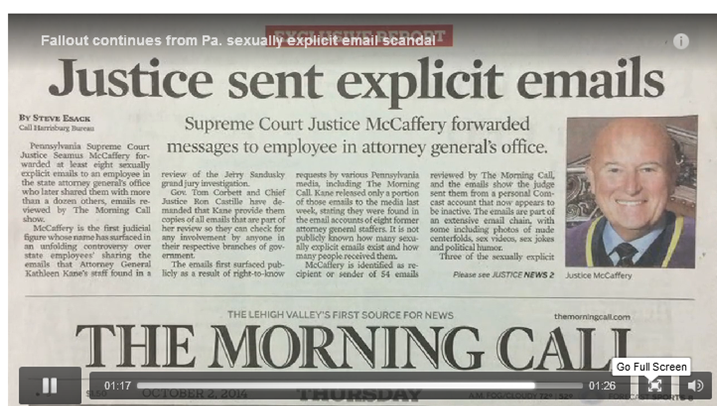 In its order, the court said it was suspending McCaffery with pay to "protect and preserve the integrity" of the state's judicial system and called on the independent Judicial Conduct Board to complete an investigation in 30 days.

The 4-1 decision, with two recusals, said McCaffery may have sought favors for his wife, who has been his chief legal clerk. Without elaborating, the court said McCaffery "may have attempted to exert influence" in judicial court appointments in his hometown of Philadelphia.

"More recently, Justice McCaffery has publicly accepted responsibility for exchanging hundreds of sexually explicit emails with a member or members of the office of attorney general," which surfaced during the attorney general's review of its handling of the Jerry Sandusky investigation, the court said in its order.

The court also cited a claim by Justice J. Michael Eakin that McCaffery on Thursday had "importuned him" to urge Chief Justice Ron Castille to retract his statements about the emails, or McCaffery would release emails embarrassing Eakin.

In a concurring opinion, Castille said, "It would be impossible for this court to function effectively while Justice McCaffery sits on this court."

McCaffery has referred to the email scandal as a "cooked-up controversy" that's part of a "vindictive pattern of attacks" on him by Castille. In his opinion Monday, Castille suggested that McCaffery displays "pathological symptoms [that] describe a sociopath" who blames others for his "transgressions."

Castille conducted his own inquiry into the emails after an Oct. 2 story in The Morning Call, which reported McCaffery had forwarded sexually explicit emails to a state worker who forwarded them to other state workers.

In its order Monday, the court relied on Castille's description of the 234 sexually explicit emails he reviewed from the attorney general's office as "highly demeaning portrayals of … women, elderly persons and uniformed school girls."

We need to bring back the Scarlet Letter to brand these people where will Mr. Seamus McCaffery show up? Will there be any criminal charges? If not, why not? I notice this judge had it in for women including the elderly is anyone looking at his cases? How he ruled? God help all those who appeared before him.


In its order Monday, the court relied on Castille's description of the 234 sexually explicit emails he reviewed from the attorney general's office as "highly demeaning portrayals of … women, elderly persons and uniformed school girls."