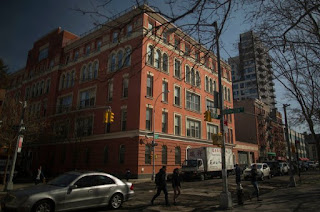 With several investigations into the deed modification and sale of a Manhattan nursing home still active, the de Blasio administration on Friday announced a new policy to overhaul its procedure for removing or amending deed restrictions.

The new process was designed to prevent a repeat occurrence of how the city handled the Rivington House nursing home’s restrictive deed, which had limited its use only to nonprofit health care providers. But after Allure Group, a for-profit nursing home company, paid $16.15 million to the city to remove all restrictions on the coveted Lower East Side property, the building ended up in the hands of luxury condominium developers.

On Friday, City Hall released a 24-page document outlining and explaining the amended policy, which included repeated references to how the changes would have affected that transaction.
The new process would apply to 14 applications for deed changes that the city shelved in March after the Rivington sale came to light.

In the future, the Department of Citywide Administrative Services, which handles deed changes, would “include legally binding language around the proposed use of the property in the revised deed restriction,” suggesting that no such language existed in the paperwork surrounding the Rivington deal.

Final approval of all changes would also now be put in the hands of Mayor Bill de Blasio — not his Office of Contract Services as is currently done — and only after a review by a new committee of top City Hall and administration officials.

Questions remain about how City Hall, which had been closely involved in discussions around Rivington House in 2014, was blindsided when Allure Group sold the property to developers for $116 million in early 2016, four months after the deed change. Memos detailing progress in the deed changes suggested top officials were being updated in the middle of 2015. Mr. de Blasio, a Democrat, said he only learned of the Rivington House sale in late March from news reports.

City Hall officials acknowledged on Friday that the administration had known about the requests to lift the deed on Rivington House, though they provided no detailed timeline.

“City Hall staff reviewed the potential alternative uses of the Rivington property with a number of agencies,” the document released on Friday said; and it concluded that the building’s continued use as a nursing home — as the administration has said was promised by Allure — served the city’s interests.

Under the new procedure, the city would consider “policy goals” in determining whether to remove a restriction in whole or in part, and not simply, as had been done for more than two decades, appraising the property’s value and then assessing a fee — usually 25 percent of the appraisal — for removing the deed restriction.

The document did not say whether the $16 million reflected that 25 percent formula.

City Hall officials have so far not explained how the two appraisals, done by an outside party in 2013 and by the city in late 2014, failed to arrive at the market value of the property that was reflected in its eventual sale. The document described them as “outdated by the time of the closing.”

The money received by the city from the Rivington deal, $16 million, should be directed “towards the creation of much needed affordable senior housing in the affected community,” the document said, and the mayor “will direct Health & Hospitals to explore the creation of additional nursing bed capacity to the affected community” to replace those lost in the Rivington sale.

The Allure Group and the city still face scrutiny from the state attorney general, the city comptroller and the city’s Investigation Department. The deals are also being looked at by federal prosecutors.