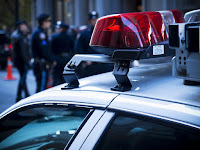 A security guard at a Staten Island nursing home punched an 83-year-old Alzheimer’s patient when she tried to leave the building, cops said Tuesday.

She suffered swelling and bruises to her face, head and the left side of her body, according to court papers.

Adagba faces charges of felony and misdemeanor assault and harassment. Neither he nor nursing home officials could be reached for comment.

Alzheimer's patients are sometimes very combative. This man could have overpowered her without punching her in the face.

PEOPLE are sometimes combative when they are FORCED into places they should never have been. Strong people fight back BAD. I am now wondering how many "combative" people are in abusive guardianships". And never mind, those drugs that can change the chemicals in the brain. We need to RETHINK who does this benefit? FORCING people , drugging them ?