Free Genevieve Bush from Abusive Guardianship an unconstitutional violation of her rights as a U.S. citizen being forced into guardianship against all her written and expressed wishes. Advocates Mary Whitten and Coz Whitten-Skaife visited Genevieve on Sunday June 19, 2016 went into Park Lane at Bellingham in West Chester and here is her details of her visit.Thank you both for making Genevieve Bush smile.

"On Sunday June 19th 2016, I visited Genevieve Bush. I was really nervous as I knew she was in an abusive guardianship. I shouldn’t have to feel so much anxiety as I did. I was so nervous. I was dropped off at the front. I went into the nursing home and saw Genevieve eating with the others. I asked a staff person if I could visit her and they said she was done eating so they rolled her out into the lobby area by the TV.

I sat down with Genevieve and read her a card. It was from her daughter and it read…I love you Mom and it had a smiley face on it. Then my phone rang. I answered it and I was able to hold the phone up to Genevieve’s ear for her to hear her daughter’s voice. At first Genevieve did not know who I was nor seemed excited to see me. She did not care about the card. 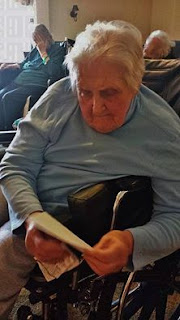 Once the phone was to her ear she lit up. She reached out and grabbed the card and started to smile.

She also looked as if she would start to cry. She then reached out and held my hand.

I spoke to her daughter on the phone told her how her Mom was reacting and then I put the phone back up to her ear and her Mom was noticeably happy.

I got 2 pictures of her Mom holding the card. Her Mom definitely appeared to be happy at the sound of her daughter’s voice on the phone. She continued to hold my hand and I gave her a hug. Feeling nervous about being there I left. I would say my total visit was about 10 to 15 minutes.

When I look back on this. I suffered severe anxiety and all I was doing was bringing an older women a card that said "I love you Mom." Why I should have been made to feel so nervous is SO wrong. I am aware of how predatory abusive guardianship work and no one should ever feel as if they can’t visit a nursing home. Shame on Chester Co for what you have done to the Bush family."

You gave Genevieve Bush something she had longed for, the sound of her daughter's voice. Thank you, Coz. I can imagine her smile!

I too experienced the same anxiety @ Park Lane Billingham when I too visited Genevieve in
early Februaury on my campaign swing to Harrisburg, Pennsylvania.

Coz Skaife, you did a wonderful thing.

In reading the story, I felt like I was there. I hope this woman is released to her daughter.

Did the Home or any of the three people in the photo give there consent for their image to be used? It looks like a nursing home. Can I photo you in your doctors care room and post it as I wish? Just looking out for the poor old folks you say you are "helping"