Fight over right to sue nursing homes heats up 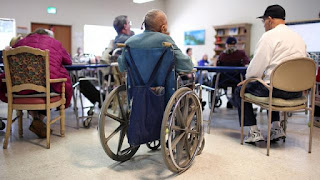 Consumer groups are making a last ditch effort to stop the Trump administration from stripping nursing home residents and their families of the right to take facilities to court over alleged abuse, neglect or sexual assault.

The Centers for Medicare and Medicaid Services (CMS) announced plans in June to do away with an Obama-era rule that prohibited nursing homes that accept Medicare or Medicaid funds from including language in their resident contracts requiring that disputes be settled by a third party rather than a court.

Public comments on the CMS proposal to do away with that rule are due Monday, and groups are urging the agency to reconsider.

More than 75 consumer, health and advocacy groups have come together to form the Fair Arbitration Now Coalition to stop CMS from reversing what they claim is a critical protection for the elderly.

Remington Gregg, counsel for civil justice and consumer rights at Public Citizen, said the rule change is not only unnecessary, but shameful.

Gregg said the provisions, known to lawyers as pre-dispute arbitration agreements, create an unequal balance of power between the nursing home and its elderly patients or the family members caring for them.

“When you are trying to get someone in a nursing home, often time it's stressful or an emotional time. Often times loved ones can’t take care of themselves, so for a nursing home to say in order to get in you have to waive your right is shameful,” he said.

“We’re talking about everything you may have a problem with — abuse, neglect, sexual assault, a wide variety of things — they are now saying you are waiving your right to full justice.”

CMS said it decided to reconsider the rule after a federal district court judge in Mississippi issued an order in November temporarily blocking the rule from taking effect.

The American Health Care Association (AHCA) and a group of nursing homes had sued CMS and the Department of Health and Human Services in October, claiming that the rule violated the Federal Arbitration Act and that the agencies had overstepped their statutory authority in issuing the law. The AHCA said Congress has repeatedly rejected legislation to invalidate arbitration agreements.

In June, the federal judge agreed to the parties’ joint request to put the case on hold while CMS revises the rule.

Under its proposed revisions, CMS said nursing homes would be required to write the arbitration agreements in plain language and explain the agreement to the prospective resident or his or her representative. Residents would also be required to acknowledge they understand the agreement.

The U.S. Chamber of Commerce is also backing the rule change. The nation’s leading business group fought against the original rule, claiming that restricting arbitration would raise the cost of nursing home care and make it harder, and more costly, for residents to resolve disputes.

“For many individual disputes, litigation in court is simply impractical. Litigation in court is procedurally complex, which means that non-lawyers need legal representation to have any hope of successfully navigating the system,” the chamber said in 2015 comments to the agency it provided The Hill.

“But many plaintiffs’ claims are too small to justify paying a lawyer to handle the matter and, in any event, most people do not have the resources to do so.”

The AHCA did not comment but provided a fact sheet outlining its position, which said arbitration is faster and cheaper than litigation. It also claimed there's no limit on the monetary award that residents can receive.

The Fair Arbitration Now Coalition, though, is making a full-court press to save the rule.

AARP, which is part of the coalition, argued in comments it submitted to CMS on Thursday that the agency lacks the statutory authority to eliminate a protection that was properly written.

“To the extent that CMS may be relying on the authority to promulgate regulations ‘to promote the effective and efficient use of public moneys’ the regulations still need to be for the benefit of Medicare and Medicaid nursing facility residents and not to their detriment,” wrote the nonprofit group for Americans 50 years and older.

In its proposal to revise the rule, CMS said “upon reconsideration,” it believes “that arbitration agreements are, in fact, advantageous to both providers and beneficiaries because they allow for the expeditious resolution of claims without the costs and expense of litigation.”

But AARP claims that statement contradicts evidence the agency cited in 2016 when it issued the rule.

Carolina Fortin-Garcia, a CMS spokeswoman, said the agency will respond to public comments received when it issues the final rule.

Opponents of the rule change are also weighing legal action.

Gregg said it’s never a good idea to threaten litigation but that Public Citizen will explore all of its options if CMS ultimately decides to allow arbitration agreements in nursing home contracts.

“Any agency action must meet a high bar for ensuring the action taken isn’t arbitrary and capricious,” he said.

“Simply making the argument that we are a new administration and want to make sure corporations don’t have regulations that are forcing them to be accountable is not a good enough reason to change a rule that underwent extensive review."

The disabled community has taken up this fight with determination. I hope the country supports them.