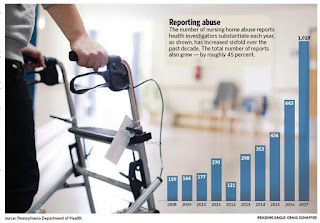 A decade ago, investigators substantiated 159 elder abuse cases reported to the Pennsylvania Department of Health. Last year, the number was 1,018, more than a six-fold increase.

But agency regulations that shield caregivers from providing even basic information to the public mean little is known about the kind of elder abuse that is prevalent, who is reporting it and what type is more likely to be substantiated.

State officials were at a loss to explain the surge in reports.

"The Wolf administration and the department are committed to ensuring safety for seniors, which includes residents of nursing homes," Nate Wardle, a Health Department spokesman, said in an email. "There is no way of knowing what has caused the increase in reported abuse cases over the last 10 years."

Advocates, however, saw a silver lining.

Diane Menio, executive director of the Center for Advocacy for the Rights and Interests of the Elderly, or CARIE, credited greater awareness for the nearly 60 percent increase in reporting from 2,689 in 2016 to 4,236 last year.

"It's in the news; people are watching and seeing they can make complaints," Menio said.

Still, elder abuse is widely believed to be underreported.

An oft-referenced study out of Boston by the National Research Council touted by advocates as evidence of underreporting estimated only 1 in 14 incidents of elder abuse is reported, and even fewer for financial exploitation, 1 in every 25.

Even though Menio and others - including an industry association and lawmakers - interpreted the increased reporting as a good sign, she also expressed concern that the percentage of substantiated abuse cases - while increasing - remains stubbornly low, only 1 in 4.

"As ombudsmen we struggle with this, that things aren't getting substantiated," Menio said. "It's my sense that they don't get reported unless it's pretty serious."

And what frustrates Menio is that Health Department investigators, she said, do not trust CARIE's ombudsman.

When conducting a performance review released two years ago, state Auditor General Eugene A. DePasquale found staffing cuts and revised policies had negatively impacted the agency's ability to prioritize and respond to complaints.

I don't put stock in these figures at all. So, substantiations are up? Is that supposed to tell us that the Department of Health is doing a better job? I don't think they are because they dismiss too many complaints, always have. They are short staffed, but that's not an excuse for them. We're talking lives here.