A court-appointed professional guardian used her position to steal from 11 vulnerable adults. 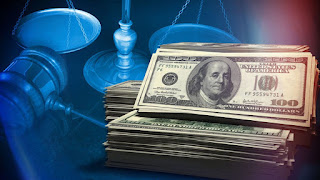 LANSING, Mich. (WILX) - Thursday the Michigan Attorney General’s office announced they had filed a total of 12 charges against Jessica Englebrecht for allegedly abusing her authority.

Englebrecht, 33, of Scottville, faces eight felony counts, one high court misdemeanor and three misdemeanors for embezzling from 11 vulnerable adults she was appointed to act as guardian of by the Mason County Probate Court. She was arraigned in Mason County 79th District Court on Friday, Nov. 13 on the following charges:

Eight counts of embezzlement from a vulnerable adult - $1,00 or more but less than $20,000, a five-year felony and/or a $10,000 find, or three times the value of the money or property involved, whichever is greater;

One count of vulnerable adults-caregiver commingling funds/obstructing investigations , a two-year high court misdemeanor and/or a $2,000 find, or three times the value of the money or property involved, whichever is greater;

Three counts of embezzlement from a vulnerable adult - $200 or more but less than $1,000, a one-year misdemeanor and/or a $2,000 fine, or three times the value of the money or property involved, whichever is greater.

“Cases like this are precisely why my office has a unit specifically charged with evaluating reports of elder abuse and why there are a number of assistant attorneys general and investigators assigned to pursue bad actors,” said Nessel. “It is appalling that someone the court trusted to look after the finances of these vulnerable adults may have taken advantage of their positions, and I am grateful to the Michigan State Police and especially Trooper Kelsey Case for her perseverance and commitment to finding out the truth. Michigan’s Elder Abuse Task Force has recommended the certification of guardians to ensure they are qualified to serve the individuals under their care, and I am fully supportive of that measure.”

An investigation of Englebrecht by the Michigan State Police began in 2019 following a referral from Adult Protective Services. Allegedly, Englebrecht embezzled more than $20,000 from the 11 vulnerable adults total. She was appointed as a guardian and/or conservator for the victims from 2017 to 2019 and allegedly used her position of power to take control over the finances of the clients.

Attorney General Nessel made elder abuse a top priority for her administration to tackle, assisting in the creation of the Michigan Elder Abuse Task Force, which outlines recommendations to improve protections for elderly Michiganders. There are currently no qualifications or training necessary to be a guardian, simply an appointment by a judge. Information on the task force can be found HERE.