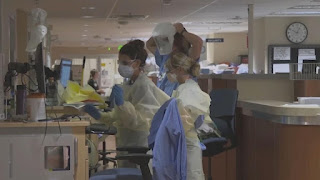 Hospitals are spending millions of dollars to fill empty positions. And a company who provides travel nurses said there's been a significant increase in demand over the last few months.

"Measured by online applications, last year at this time we were at five times higher than the year before," said Lauren Pasquale Bartlett, senior vice president of marketing at Fastaff Travel Nursing. "Right now, we're looking at double the numbers, triple the numbers."

Bartlett said it's a direct correlation to the amount of hospital admissions that health care systems are seeing.

“Four to six percent is what we expect in terms of vacancy rate,” said Gill Peri, president of Riley Children’s Health. “It’s a little bit higher than that.”

Franciscan Health in Indianapolis agreed, saying it's because nurses are leaving for other jobs or retiring.

Hospitals said the shortage does not put patient care at risk.