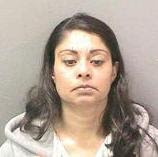 Earlier this week, the Orange County District Attorney charged Susana Duran, 38, with one felony count of financial elder abuse by a caregiver, 149 felony counts of using a debit card without authorization, 10 felony counts of forgery, and white collar crime sentencing enhancements for fraud and loss over $100,000 and loss over $65,000. If convicted, Duran faces a sentence ranging from two years in state prison up to a maximum of 111 years in state prison. The large range in the potential sentence is because there are a large number of counts and each count has a minimum and maximum. For the maximum total sentence, each individual count would need to get the maximum, plus, the sentences for every count would need to run consecutively, not concurrently.

Duran was scheduled for arraignment yesterday, but it was continued to October 19. Her bail was set at $250,000, but she did not post it and remains in custody.

It looks like they've got all the goods on Susana Duran. Now, let's hope for a speedy trial and an appropriate sentence if found guilty.

I am glad Duran remains in custody - the streets are a bit safer tonite.

Caregivers who take from defenseless, helpless, or vulnerable people should suffer harsher punishment.

Susana Duran should have to pay back the money - with interest. She should be looking at several years of community service if/when she gets out of prison. And she should be in prison for a very, very long time.

Another example of why it's important to do background checks, too.