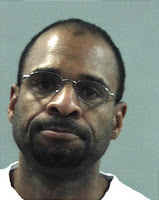 Ricky Edward McClain, 45, befriended a 96-year-old man, then used that relationship to bilk the man out of $30,000 in the past year, said Ogden Police Sgt. Danielle Croyle.

Croyle said McClain began the friendship by offering to perform services that the alleged victim could no longer perform for himself. It's a ploy that scam artists typically use to gain their victims' trust, the sergeant said.

"The thing that's sad about this is that (McClain) befriended him," Croyle said. "It's a violation not only of your financial stability, but your trust."

Email ThisBlogThis!Share to TwitterShare to FacebookShare to Pinterest
Labels: Utah

Did he take as much money as guardians do?

Yes, it certainly sounds like Ricky Edward McCain laid all the groundwork for the "friendship" and then took advantage of the elderly man.

That hurt the victim, not only financially, but as the article says, it hurt him emotionally too -- a violation of trust.

A predator through and through.

I hope Ricky Edward McCain is held accountable to the fullest extent of the law.