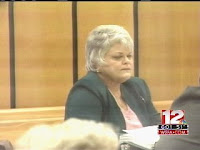 In declining to hear the case, the Court issued a Certificate of Judgment of Phillips’s conviction for felony theft and ethics violations prosecuted by the Attorney General last October.

Phillips’s appellate bond now requires her to surrender to the county sheriff within 15 days. Phillips faces two concurrent sentences of 10 years, which were split for her to serve three years incarceration followed by three years of supervised probation.

Attorney General King said, “It is appropriate that Sherrie Phillips begin to serve her prison sentence.

We are sending a strong message that no one is above the law.

This verdict proves that even judges who break the laws they apply are accountable for their actions.

My commitment to the people of Covington County and to citizens throughout Alabama is that, as their Attorney General, I will prosecute those who break the law and betray the public trust, and that I will take action to preserve the integrity of our government.

Today, we make good on that pledge”

Phillips was found guilty by a jury in Covington County Circuit Court on October 29, 2008.

See Also:
Where the Rumors Were Coming From

Judge on Trial
Posted by NASGA

Email ThisBlogThis!Share to TwitterShare to FacebookShare to Pinterest
Labels: Alabama

Good -- I've been hoping Sherri Phillips would get what she's got coming!

Attorney General King said, “It is appropriate that Sherrie Phillips begin to serve her prison sentence."

Applause and standing ovation on behalf of her victims. I would like to see her sentenced for the entire 10 years CONSECUTIVE!

When Judges and fiduciaries go criminal, they earned it and they deserve 10 times the punishment.

My hope for judge Phillips is: absolute misery!

It's a long time coming, Sherri Phillips, but what goes around, comes around!

I'm with you, Sue, a round of applause for AG here!

It does my heart good to see a crooked judge held accountable!

I am sure this is a happy day for victims who have stood before Sherri Phillips and pleaded for their loved ones. She did get what was coming to her.

Best news I've heard all day!
I know another one who should be joining her!