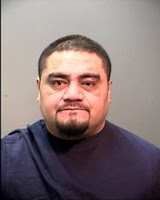 A Medford couple who operate a foster care home are in jail for allegedly pressuring an elderly woman to pay more than $100,000 for odd jobs done over 15 months, Medford police said.

Mineretta Viliamu is a licensed foster care provider and the couple operated a foster home at their house. The victim of this alleged theft lived in her own home, however, and occasionally got help from the Viliamus, police said in a news release.

Police got a report early this month of possible financial exploitation of an elderly Medford woman by the Viliamus, Detective Sgt. Scott Clauson said. A detective from the Medford Police Department's financial investigation section determined that the woman, a widow, had paid the Viliamus more than $100,000 over the last 15 months for a variety of odd jobs around her house. She told the detective that the pair, who had helped care for her husband before he died, had pressured her to pay large sums of money for small jobs. Clauson said that in December alone, she paid the pair $19,000.

Email ThisBlogThis!Share to TwitterShare to FacebookShare to Pinterest
Labels: Oregon

Keep them right there in jail. Creeps, taking advantage of this poor elderly woman. Wonder how the child care is that the foster children receive??

I was thinking the same thing about the quality of care the foster children probably got...

I feel sorry for the victim and the foster kids as well. They probably have had a very rough life with these two.

Government must be blamed for these things.

How are they protecting citizens when they license thieves?

How much preliminary investigation do they do?

ripping out elderly ppl dae need to be put in jail for gudd...wat the state need to do now is come down on all the Elderly Care in Medford Or..cause some juss taking care of dem for da money and dosnt do anywrk but get dose free food from the FOOD BANK nd feed them wit it..i think da place were to put the Elderly People at is in the Convalescent Home own by White People...