Activist Calls for Probe of PA Judicial Conduct Board 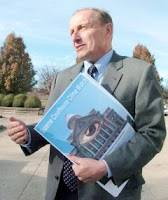 A self-styled citizen activist is pushing prosecutors to probe the state Judicial Conduct Board for obstruction of justice in its handling of misconduct allegations against former Luzerne County Judge Michael T. Conahan.

Gene Stilp urged the U.S. Attorney's Office and the state Attorney General's Office to launch separate investigations into the deliberations and decision making that led the conduct board to ignore allegations Conahan engaged in nepotism, cronyism and case-fixing.

Stilp, a Wilkes-Barre native living in Harrisburg, filed the state Supreme Court case overturning the 2005 legislative pay raise that sparked public outrage. He was the original complainant in the so-called "Bonusgate" scandal that has led to charges against nearly two dozen people in state government. Many might recognize him from the times he brings a giant inflatable pig with him to protest government abuse and waste.

Full Article and Source:
Story from Citizens Voice: Activist Calls for Probe of Judicial Conduct Board
Posted by NASGA

Standing up and speaking out - what an inspiration!

This is exactly what needs to be done. Thank you Mr. Stilp.