Steven Rondos Gets 5-15 Years in Prison!

A disbarred New York lawyer is headed to prison for stealing money he was supposed to manage for incapacitated children, mental patients and elderly people.

Steven Rondos was sentenced Tuesday in a Manhattan court to five to 15 years in prison.

Rondos was court-appointed to assure his victims' money was used for their benefit. Some were medical malpractice victims who had won money in lawsuits.

Prosecutors say Rondos stole more than $4 million from about two dozen people and used the money for luxuries including a $31,000 television, a $99 umbrella and a $1.4 million home in Ridgewood, N.J.

The 45-year-old Rondos pleaded guilty earlier to charges including grand larceny. He has said depression was a factor in his crimes. 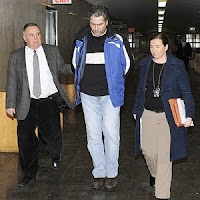 Source:
NY Atty Gets Prison for Theft of Money He Managed
Posted by NASGA

This is wonderful news!
Rondos said depression was a factor in his crimes...
Did he ever stop to think how depressing it must be for his victims and their families as his exploitation took place?

Sentence too harsh? No way!
He didn't get enough time.

Do all lawyers get a "license to steal" when they graduate law school?

Apparently so, because the Unified Bar-fia protects them!

Steven Rondos is only sorry he got caught.

Depression I do not think so, when an attorney stole money from clients around here it was because he had a mental breakdown over getting divorced. The problem was he stole money from us 4 years before his divorce.

He got sentenced to 8 years and got out in 6 months. Mental Illness and they did not take his rights away and assign him a guardian over all the money he stole.

Depression, my foot. The only "illness" Stven Rondos has is GREED!

if anyone thinks that this man was the only one involved think again how about the court examiners who check the accounting and what about judges who signed off onthe accounting. there needs to be a much bigger investigation then it
and all who where involved should all rot in hell. mr rondos was also there scape goat,and like i said it is much much biiger then mr rondos

I would just like to say something to these arrogant self absorbed b*tches who commented before me. Do any of you even know Mr. Rondos? Yeah that's what I thought, none of you do. Yes Mr. Rondos has committed a serious crime, the punishments are way too harsh. Think about his poor kids! He is a father to three beautiful children out there. They must miss him so much as one can't believe. Yes, he does deserve time, but 15 years is way too much. I know this is a very late time to be commenting, but I think it had to be said. Think about if someone very close to you, or maybe even yourself, did this. Would you be saying the things your saying now? No. You would not. And I know you all are probably thinking, what the f*** is this person talking about? Someone I know or myself would never do this! Think again. Everyone is hiding something. NOBODY in this world is completely clean. If Mr. Rondos was just a regular person without a law degree, none of you would probably give a sh*t. Just because he had a high position and that you are glad that he fell, doesn't mean you should talk trash. I am in full disgrace of what our world is coming too, putting other people down. Mr. Rondos has suffered from depression and other mental illnesses, and I know for a fact. I know him first hand. He is sorry. Not just that he was caught, because he realized he had hurt the people closest to him, let alone others. I hope Mr. Rondos gets out soon. As for the rest of you, I hope somehow something will happen to you that you would regret what you have said. Thank you.

To the latest Anon:

No, we don't know Rondos but we do know what he did. He stole from helpless and vulnerable people.

Think of his beautiful children, you say? Well, you're right. It's not their fault and it's a shame they have to carry the burden of knowing what their father did. But, that's not our fault either.

Did Rondos give an ounce of consideration to his victims? NO HE DIDN'T. Not victim, but victims. Plural. He preyed upon helpless people and it amazes me that you can even think to justify that or think his sentence was too soft.

Not all people who post on this blog are victims of guardinaship abuse, but I am. I know first hand and let me tell you, it's you who doesn't know what victims of guardianship abuse go through. Look at NASGA's victims page on the main website and see the faces - the innocent and pleading faces - and maybe you'll have a glimpse of the picture.

And I'll answer you directly, if one of my family members did what Rondos did, I would feel he/she deserved everything that could be thrown at him/her.

I can appreciate that you are suffering because of what he did. You must be related or may even be his wife. And we are sorry for your suffering but do not ask us to be sorry for his.

I wholeheartedly agree with Barbara. Rondos is not the one to be pitied here. His family is and his victims are. But not him.

I am that anon that you answered to earlier this year. I am not his wife, but I am someone close to him and if you knew who I really was then I think you would watch how you talked to me and apologize. I understand that you have had first hand experience on guardianship abuse, and I am greatly sorry for that. I cannot fully understand how you must feel, for it is a terrible thing. Mr. Rondos does deserve time. I do not disagree at all. It is about 3 years already. You, however, do not know the whole story, only what the media puts out there. They want everyone to hate him and have him suffer. I think it is interesting, however, when you say that if you were a relative or a close friend of a person who did this that you would want them to get the full punishment and suffer. If this was your father, or brother, or any other type of close relation, would you really want him to get hurt as much as possible? If so, you do not know what it means to love then, and I apologize to anyone who has to deal with you if that happens to them. I would not want to know you if I know you would drop me and not give me all the support possible. I know your life must be hard with what you said, and I am not asking you to be sorry because if I were you and did not know everything that went on I probably wouldn't be either, but I do hope that you can find love in your heart and not speak for what you believe Mr. Rondos thinks or feels. You have no idea. If you are him or happen to be a mind reader or something then go for it, but you are not so please do NOT say how he feels. Thank you.