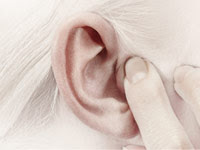 Adults with hearing loss are significantly more likely than adults with normal hearing to develop dementia, according to a new study out from researchers at Johns Hopkins and the National Institute on Aging. The study — which finds that the greater the hearing loss, the higher the risk — may open a new avenue of research into dementia and Alzheimer's disease.

Men and women in the study who experienced severe hearing loss were five times more likely to develop dementia than those with normal hearing. But even mild hearing loss doubled the risk of dementia.

Researchers found that those with hearing loss at the beginning of the study were much more likely to develop dementia by the end, even after taking into account age and other risk factors. The risk of dementia only began to rise once hearing loss began to interfere with the ability to communicate — for example, in a noisy restaurant. The study also found that hearing loss increased the risk of Alzheimer's disease, but the two were not as strongly linked as hearing loss and dementia.

I have also heard this from hearing experts. What people might think is dementia, may actually be hearing loss.

And if they have dementia at all, being denied their hearing aids makes it all the worse.

I didn't know that - thank you, NASGA

My mother is in a nursing home and they keep losing (they say) her hearing aids. Then we get into a fight because they won't replace them. It's a constant struggle.

I can't help it, but an article like this has me thinking of teenagers driving around with boom boxes turned to the loudest setting possible -- vibrating the entire block.

Look where they're headed. Very sad.