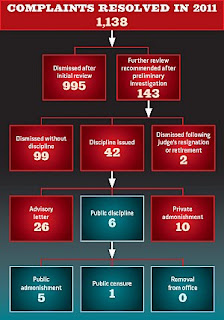 This year as in past years, the state's Commission on Judicial Performance published a report chronicling the bad behavior of California's judges. And like previous surveys, what this year's report shows most dramatically is how rarely judges are disciplined.

As of 2011, there were 1,786 judges on the bench. But over the past half century, only 25 judges have been removed from office and just 48 were publicly censured. Some of those punished had accumulated a long laundry list of commission admonishments. Others were caught in egregious behavior, like Judge Patrick Couwenberg of Los Angeles County Superior Court, who in 2002 was found to have lied about his judicial credentials and service in combat. And impairment sometimes contributes, as in 1977 when Supreme Court Justice Marshall F. McComb was found to be suffering from senile dementia.

This is important information that needs to get out in the media and I thank NASGA for doing its part.

I wonder if the govt is keeping track on judicial discipline nationwide. I doubt it. Sometimes, I see a state report as this one, but never a comprehensive national report.

Are you kidding Mike? You do raise a good point, however if the government kept track of or monitored reports of that, they'd surely realize there is a problem and they'd have to act. Then again, the reports would likely be misleading, considering only 1 out of every 150+ complaints filed actually results in disciplinary actions......all others deny any wrongdoing.

I wonder if the schools still teach children about our wonderful system of justice?

My experience on a judicial kickback complaint was dismissal without an ivnestigation, despite the statutory requirement that if a complaint were facially meritorious, it "shall" be investigated. What could be more facially meritirious than a $20,000 kickback claim?
Although it's usually a waste of time to file a discipline complaint against a judge, WE MUST BOMBARD THEM WITH COMPLAINTS to stop the summary dismissals and make them pay attention!.