On February 11, 2014, California’s Human Services Committee held a joint hearing on deficiencies in assisted living facilities and lack of oversight by CCL. Department of Social Services Director Will Lightbourne acknowledged many shortcomings in his department. Elder rights advocates remember Lightbourne for his opposition to a resident’s personal rights in 2012. 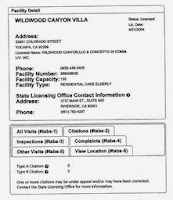 An LPA in San Bernardino County cited Wildwood Canyon Villa for violating a resident’s right to visitation, an offense that constitutes criminal elder abuse. Then the LPA cleared the citation without requiring a correction. Wildwood unlawfully isolated the victim for another year after the citation. The LPA ignored subsequent complaints to CCL.

The San Bernardino County LPA reviewed facility records that substantiated Wildwood Canyon Villa violated a resident’s right to phone calls, another offense that constitutes criminal elder abuse. The LPA stated that she did not issue a citation because her manager had not instructed her to investigate that particular violation.

The same LPA reported in early 2010 that Wildwood Canyon Villa placed some residents’ mattresses directly on the floor, which is a violation of licensing regulations. The LPA did not cite the violation until late 2011, after CCL received a number of complaints about the ongoing violation.

Until recently, the only way to obtain information on facilities with numerous violations was to go in person to the local CCL office and review the paper files. In some cases, CCL offices required the public to make appointments up to a week in advance.

An outcome of the February 2014 hearing is a searchable online database of facility citations.

Searching on Wildwood Canyon Villa returns a list of complaints filed against the facility since 2010.

Click on the Complaints tab to see dates of facility visits in response to complaints.

Thank you, Linda.
Good to know there is info available in order to make a decision.

It's so important to make this licensing violation information public. The state government agencies are not going to protect the elderly and disabled, so family and friends must do so.

This reminds me of the ongoing Scott Schuett saga in Virginia -- please google Scott Schuett for some glimpse of the horrors to which 400 people in six facilities in five different jurisdictions in the Hampton Roads area were subjected, literally for years.

At the time, state officials downplayed and covered up the violations, a laughably ineffective tactic since the violations were all posted online.

Interestingly, the online system also published some of Schuett's responses to the violatins, such as his argument that NINE missing or malfunctioning smoke detector batteries was no big deal, and that mentally ill people will fight, no matter what you do, so why bother to try to stop them.

For over a year and a half, state officials and various unethical state-paid attorneys argued that SCOTT SCHUETT had due process rights, giving no consideration whatsoever to the fundamental rights of the elderly and disabled HUMAN BEINGS subjected to abuse, neglect, and mistreatment in his dangerous, filthy facilities.

Today, ten months after state officials were finally forced by adverse publicity to shut this monster down, these same state officials continue their relentless disinformation campaign of character assassination and deliberate defamation against the honest officer of the court who called them out.

Shameful, truly shameful. And very frightening for the next victims these unethical attorneys are paid to "protect."

In my opinion many facilities are in violation of some kind. There needs to be more oversite.

Keep at it, Linda. You continue to set an example for advocates to immolate.

Thank you for all you do, Linda.