T.S. Radio Tonight: Reporter Kelly O'Meara on the Forced Use of Psychotropic Drugs

What happens in CPS is quickly adapted to APS

It is a case of misdiagnosis, misinformation and unrestrained persecution. Parents need to understand this is not an isolated case and it is happening across the nation far too often.”

Despite prosecutors’ second attempt this year to bring criminal charges against Detroit mother Maryanne Godboldo, who underwent a 10 hour stand-off with police for refusing to administer a powerful antipsychotic drug to her daughter, Wayne County District Judge Gregory Bill has become the second judge this year to dismiss the charges.

BIO:
Kelly O’Meara is an award-winning investigative reporter whose coverage of the adverse effects of psychiatric mind-altering drugs is virtually unmatched in the United States. After 16 successful years as a Congressional staff member, Kelly joined Washington’s Insight Magazine where she published numerous hard-hitting articles examining prescription psychiatric drugs and the increasing number of school shootings.

After six years at Insight, Kelly became an independent author with the publication of Psyched Out: How Psychiatry Sells Mental Illness and Pushes Pills That Kill, an in-depth investigation into the fraud of psychiatric diagnosing and the dangerous, potentially life-threatening adverse reactions connected to the prescription mind-altering drugs used as “treatment.” She continues to publish powerful reports of the use of psychiatric drugs with children, members of the military and our wider society.

LISTEN LIVE or listen to the archive later 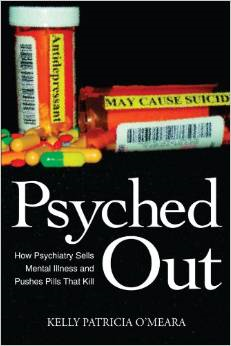 Few would argue that people suffer from mental illness, mental breakdowns, depression or any number of adjectives that describe behaviors that adversely, even severely, affect people's lives. In law it is said that "it doesn't matter what one believes, only what one can prove" The same can be said for psychiatric diagnosing. It matters little what anyone in the medical/psychiatric community "believe" is the cause(s) of mental illness. The question that has not been answered is whether tens of millions of Americans who have been diagnosed with any one or number of psychiatric mental disorders suffer from a mental "disease" - an objective, confirmable abnormality of the brain. What is known is that neither the American Psychiatric Association nor the National Institute of Mental Health, nor any other medical organization, is capable today of making available scientific evidence to prove that any psychiatric disorder is an objective, confirmable abnormality of the brain.

Psyched Out is available through Amazon
Posted by NASGA