Man indicted for taking money from his elderly father 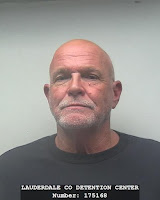 FLORENCE — A Florence man remains in jail after he was accused of using his elderly and disabled father’s debit card to withdraw more than $10,000 from the account and then trying to use the same card to bond himself out of jail.

Roger C. House, 63, 1828 Nassau Blvd., Florence, is charged with fraudulent use of a credit card, first-degree financial exploitation of the elderly and second-degree theft of property.

Police Detective Justin Wright said House was taken into custody Tuesday after being indicted during the July session of the Lauderdale County grand jury. He said House was indicted on the charges of fraudulent use of a credit card, and financial exploitation of the elderly.

The second-degree theft of property charge was added after House tried to use the same debit card to bond himself out of jai, Wright said.

House is accused of going to businesses and using the card to buy items and get $200 cash advances.

Wright said this went on for more than a year, with House taking more than $10,000 out of his father’s account.

“His father got suspicious but never would say anything to his son,” Wright said. “He finally did tell someone what he suspected was going on, and that third party called us.”

Jerry Groce, district specialist for the Alabama Department of Human Resources, said financial exploitation is a growing problem for the elderly.

“We see more and more financial exploitation cases, where family members, usually children, are tapping into their parent’s resources, savings, checking account, and even their trust funds,” Groce said.

“Unfortunately, this type of elder abuse goes unnoticed a lot of times.”

Groce said many older residents can be very trusting. “They are sometimes afraid to say anything because they don’t have anyone else to look after them, or they’re ashamed to say their family members are taking money from them.”

From all that is going on against our elderly , it seems that the state wasn't first at this elderly gentlemans assets . The nerve of his son . They will now be sure something like this does not happen again . They will guardianize the elder ,in his best interest , of course!